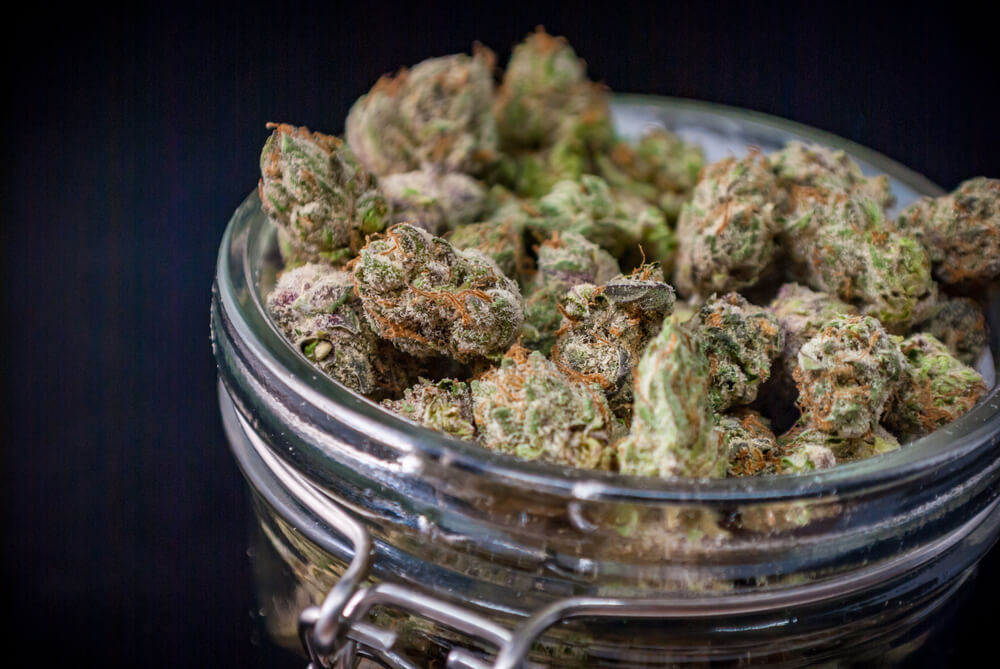 Popcorn weed, also known as popcorn nugs or ‘larf cannabis,’ is held very near and dear to many budget-conscious tokers’ hearts, but the larger weed community as a whole may not hold them in the same high regard – pun intended.

Popcorn nugs were popularized and are known for their distinct popcorn-like appearance. Shocking. We know—such creativity.

However, utilizing popcorn weed is also an excellent method for cash-strapped tokers on a budget to get high, make edibles and enjoy weed without breaking the bank.

That said, what are popcorn nugs, exactly?

In the before-times of legalization, you might’ve stumbled upon these tiny buds of joy in a jar at your local dispensary. Unlike popcorn chicken, these morsels of weedy goodness are small, tight and priced competitively than other weed offerings.

Due to their low price point and unorthodox appearance, many regard popcorn weed as a substandard product, but this cannot be farther from the truth!

Popcorn weed has been delivering incredible highs for frugal tokers for decades and continues to do so. If you’ve been sleeping on popcorn weed, here’s the wake-up article you need to read!

What are Popcorn Nugs?

As the name implies, popcorn nugs are smaller buds of cannabis available for sale at most dispensaries.

Their name comes from their small, popcorn-sized appearance. Unlike regular cannabis flower buds, popcorn weed buds are much smaller in size. Their shape is also non-uniform and lacks the incredible bag appeal that full-sized bud offers.

That said, don’t let appearances fool you! Remember the lesson about not judging a book by its cover? This sentiment definitely extends to popcorn weed.

Popcorn weed is every bit as potent as regular weed and at a cheaper price point to boot, too. The secret to its appearance and size is not due to its lack of potency or flavour. Instead, it comes down to how the cannabis plant is grown.

How is Popcorn Weed Made?

Popcorn weed is a byproduct of the cannabis cultivation process. When growing weed on a commercial scale, growers are always looking to make the most out of their space.

However, it’s important to keep in mind that some strains just produce smaller buds.

Cannabis plants are just like regular plants – they need space, sun, and water to grow effectively. In order to develop into the best tasting, most potent buds, each plant needs to have a specific amount of nutrients, care and love.

When grown properly, the cannabis plant’s upper branches, known as colas, will produce dank buds packed with kief that we all know and love.

However, not every part of the plant will be able to thrive to its fullest potential. This discrepancy isn’t the grower’s fault – it’s just a numbers game! Some plants will inevitably face some difficulty during the growing process.

Usually, these parts of the plants will be cut away or pruned to allow other parts to absorb more energy and nutrients. Sometimes, cultivators can miss removing some of these plant parts since they grow near the bottom of the plant, where they’re shaded and don’t have as much access to sunlight or space.

When these parts of the plants develop, they’ll form smaller-sized cannabis colas that will still produce buds. These buds are what make popcorn weed.

Since these colas weren’t able to develop as fully as their counterparts, they’ll be smaller and ever so slightly less potent. Due to these reasons, popcorn weed is sold at a lower price point, but that’s okay!

Ultimately, the savings are passed on to you, the toker!

Remember that not all smaller, popcorn-sized nugs are of lesser quality. Some strains just naturally produce smaller buds! So while size is usually an indicator, this is not always the case!

Honestly, there’s not much that separates popcorn weed from regular weed aside from the size and shape. Popcorn weed will still get you high. You just might need a little more to get you there.

Flavour and potency wise – popcorn nugs have every bit as much quality as regular nugs. Popcorn nugs might not be at that AAAA level, but they come pretty damn close!

Let’s not split hairs here. Popcorn weed is leagues ahead of your typical ditch weed.

If you’re a stickler for the bag appeal, then popcorn weed probably isn’t for you. Don’t get us wrong. There’s definitely something to be said about opening a fresh bag of weed and smelling all those beautiful terpenes, but let’s not lose sight of why we buy weed in the first place.

For some tokers, the sole objective is to get high, and if you share in this mission, popcorn weed will help you achieve just that, and at a lower price point, which means more bang for your bud!

Are you still not convinced that popcorn weed is all it’s cracked up to be? No problem!

Below, we’ll outline three reasons why you should at least give popcorn weed a chance.

Popcorn weed won’t be as beautiful as full flower, but, let’s be honest, appearances are not the sole reason why you’re buying weed.

There’s a time and place to be enjoying a fattie of some AAAA-level stuff, but there’s also an occasion for just picking up something nice and light from your local dispensary and burning one down.

Besides, how often are you going to be busting out the big bucks for some AAAA-level stuff anyway?

Popcorn Weed is Easier to Dose

Popcorn nugs are smaller, and that can sometimes be a good thing. Depending on how often you smoke, having too much of a good thing is possible.

If you’re the kind of toker that uses a bong or a pipe, you’ll know that feeling of wanting to finish an entire bud or grinder full of weed at once. Waste not, want not, right?

With popcorn weed, the buds are naturally smaller, so you can control your portion sizes more effectively. Depending on how large the nugs are, you might even be able to place a popcorn nug directly into your bowl without even grinding it up! Talk about convenience!

Check out 10 of the World’s Craziest and Most Expensive Bongs Here! You Won’t Believe How Much Some of These Bongs Cost!

Do you like cooking up cannabis-infused creations in your kitchen? Fancy yourself a weed foody? Don’t like how expensive weed can be when you’re cooking up a fresh batch of edibles? Popcorn weed is perfect for you.

As all cannabis chefs will know, weed needs to go through a process known as decarboxylation for our bodies to absorb it. Without this process, we won’t be able to get high at all!

When we’re smoking or vaping weed, the heat from a lighter will do this process for us. When we’re making edibles, we have to do it manually.

The easiest way is to chop up your weed into tiny pieces and throw them into an oven until it’s golden brown. However, buying full-sized bud just so you can chop it up and bake it seems counterintuitive. Additionally, most of the weed’s terpenes and flavour will be lost in the process, too.

It doesn’t make much sense to buy quad bud to make edibles, but it also isn’t a good idea to use ditch weed, either.

The solution? Popcorn weed! Every bit as potent as regular cannabis but at a lower price point and smaller size, popcorn nugs are perfect for baking and creating. You might even be able to get away with baking these nugs without even chopping them up!

Popcorn Nugs are Worth a Pop

Popcorn nugs don’t have the best reputation, but we can chalk that up to ignorance more than anything else.

Many people will look at the price of the bud first and unconsciously use it to judge its value without considering a strain’s smell, flavour, or potency. When it comes to weed, there’s more than meets the eye.

After reading this article on popcorn weed, we hope that we were able to expand your weed horizons just a little bit and encourage you to give these bite-sized nugs of weed a try.

Although their bag appeal is lacking, popcorn weed still has a lot of love to give, and at such a low price point, they’re at least worthy of a try!