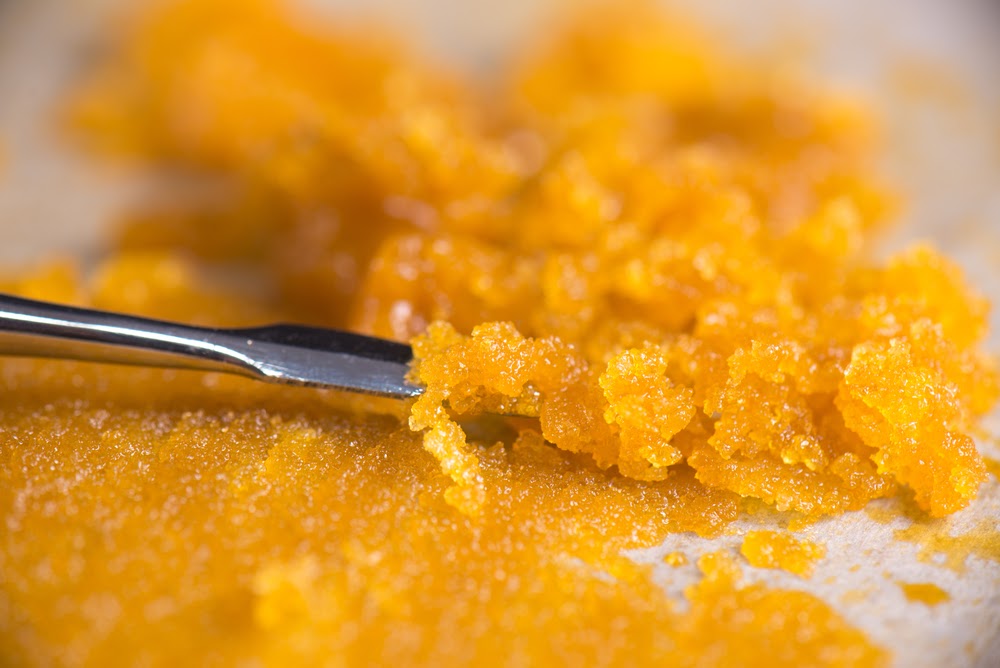 Unlike other conventional concentrates, live resin is not made with cured and dried cannabis. Instead, manufacturers flash freeze cannabis flower and make concentrates out of the flash-frozen cannabis buds!

Why does this matter and what’s the difference between live resin and other kinds of concentrates? We’re going to get into exactly that in this all-inclusive guide to live resin!

What’s the Difference Between Resin and Live Resin?

When it comes to “resin,” there’s a lot of co-opting of the term to describe more than one thing.

Resin can refer to either the black, sticky tar that collects in a bong or pipe chamber after hitting a bowl. More commonly. resin refers to the fine dusting of crystals found on cannabis buds.

This resin is actually the plant’s trichomes, crystals that are responsible for providing the psychoactive high of weed!

The reason why live resin is considered to be “live” is because the weed flower is flash-frozen before it’s processed.

Conventional cannabis concentrates such as shatter, distillate and wax, the cannabis buds have to be properly dried and cured first.

Curing cannabis is essential if you want to have a smooth, flavourful, and potent experience, but it also eliminates some of the terpenes and cannabinoids in weed.

The flower used to produce this living resin doesn’t have a cure and drying process, so the community began referring to it as a “live” concentrate!

What’s so Special About Live Resin? 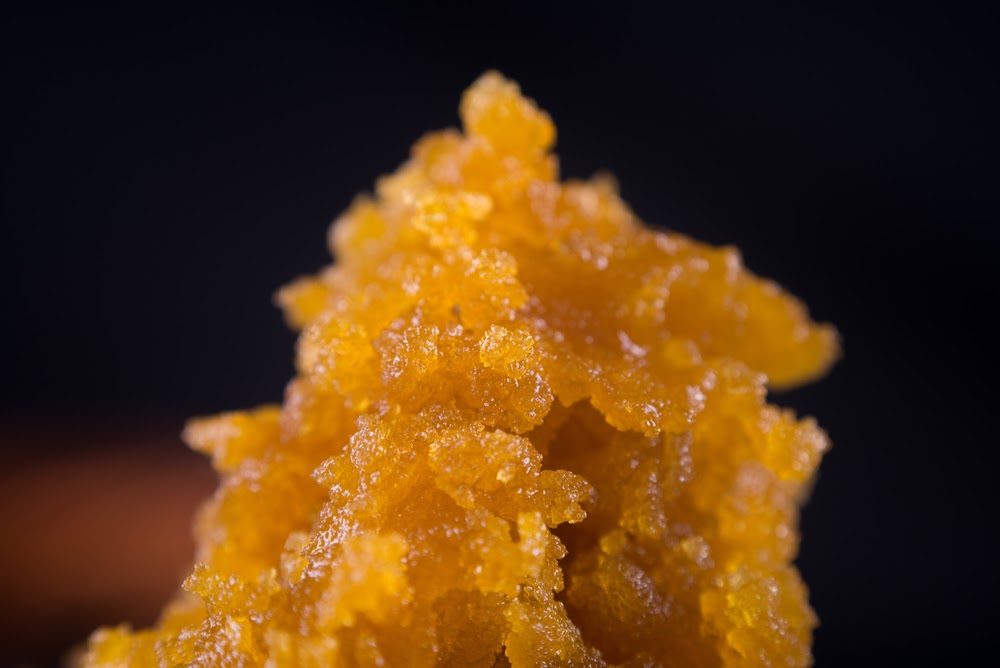 When talking about live resin, the word we’re going to have to pay attention to is “live.” What makes live resin “live” anyway?

Is it actually alive?

Live resin isn’t actually a living, breathing thing, but once we explain how it’s made you’ll come to appreciate the name!

Where other concentrates require dried and cured bud, live resin utilizes freshly harvested cannabis flower which is then flash-frozen.

This provides many benefits.

The plant’s terpenes, the compounds that provide cannabis plant’s with their unique flavour, aroma and effects, become lost and denatured during the drying and curing process.

What this means is that dried cannabis or concentrates made with dried cannabis lack the full spectrum of flavours and active compounds that “fresh” cannabis will have.

However, it’s impossible to smoke freshly harvested cannabis due to its high moisture content.

How do we bridge the gap between wanting to enjoy all the benefits, flavours and aromas of fresh cannabis while also respecting the fact that fresh cannabis cannot be smoked?

The answer is live resin.

By flash-freezing weed as soon as it’s harvested, all of the plant’s original flavour, aromas and active compounds are preserved in the process. That means that you’re going to be consuming a concentrate that has the flavour, aroma and effect of fresh cannabis.

Is Live Resin Better Than Distillate? 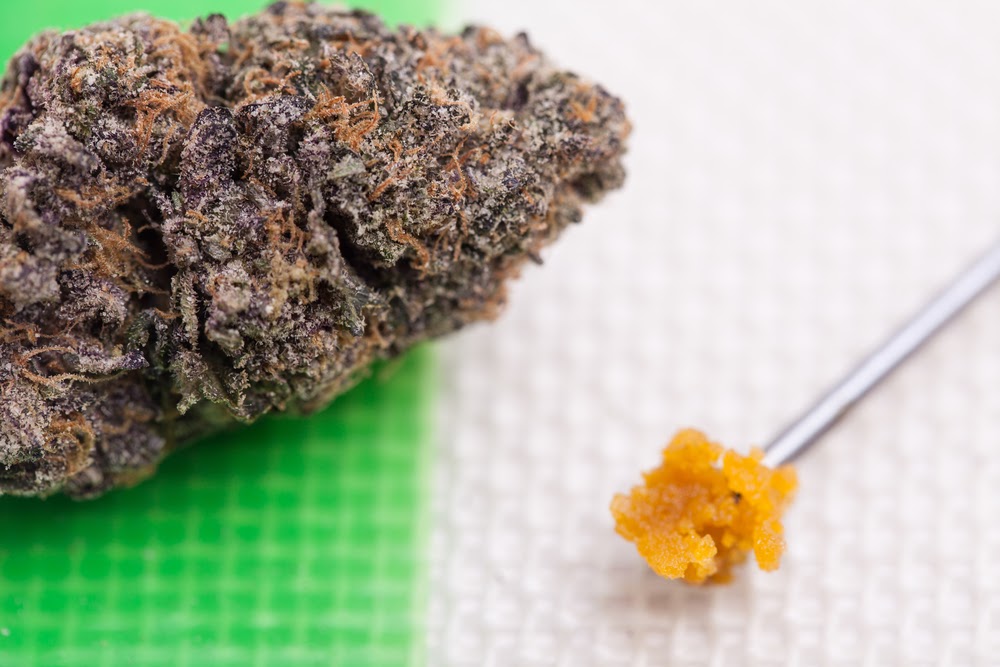 If flavour, aroma and a more nuanced psychoactive high are things you look for in a concentrate, then this concentrate is the way to go.

Unlike distillate, “living” Resin has all of its original plant compounds still intact. There’s no purging of terpenes, flavonoids or other cannabinoids in its production process so you’ll be experiencing an overall tastier and more aromatic concentrate when compared to distillate.

At the same time, distillate is magnitudes more potent than resin precisely because all of the plant’s undesirable compounds have been removed, leaving nothing behind but pure THC.

Where the THC level of this “living” concentrate can range from 30 to 70% depending on the quality of the starting material and the manufacturer, distillate’s THC Level routinely ranges from 60%-95%.

At the end of the day, it boils down to consumer preference and what you’re looking for in a cannabis concentrate.

Want something tasty and aromatic that’s also able to provide a unique high? Go with live resin. Just want to get high off of something potent? Go with the distillate.

How is Live Resin Consumed?

The most popular way to consume live resin is through dabbing. What is dabbing? Don’t be afraid of the jargon; dabbing is just vaporizing a cannabis concentrate through a dab rig.

Dab rigs can be purchased at any local head shop or even online if you’re so inclined and it’s simple to learn and pick up.

If you’ve been involved in the cannabis scene recently, then you might have also heard of distillate vape pens.

These vape pens usually only vaporize cartridges of distillate, but many manufacturers have come out with “live resin” cartridges to meet consumer demand.

Consuming this concentrate in a joint, bowl or bong is possible, but not recommended due to the difficulty in properly heating it up enough to smoke.

If you’re up for the task, you can put a bit in your bong bowl or down the length of your joint on a bed of cannabis flower before smoking up. The lower heat might waste a lot of your concentrate product and could cause a mess so caution is definitely warranted!

How is it Made?

Live resin should only be made by individuals with proper lab-grade equipment as most of the process can be dangerous otherwise.

Concluding Thoughts on the Living Concentrate

Due to the difficult chemical processes and materials needed to produce live resin, we advise all interested parties to purchase their live resin instead of opting to produce it at home.

Working with butane at the temperature required to produce live resin is very dangerous and should be left to professionals.

With that being said, if you’ve ever had the desire to try and experience the flavour, aroma and effects of freshly harvested cannabis, then we cannot recommend live resin enough.

Purchase some for yourself and try it out! We guarantee you won’t be disappointed.