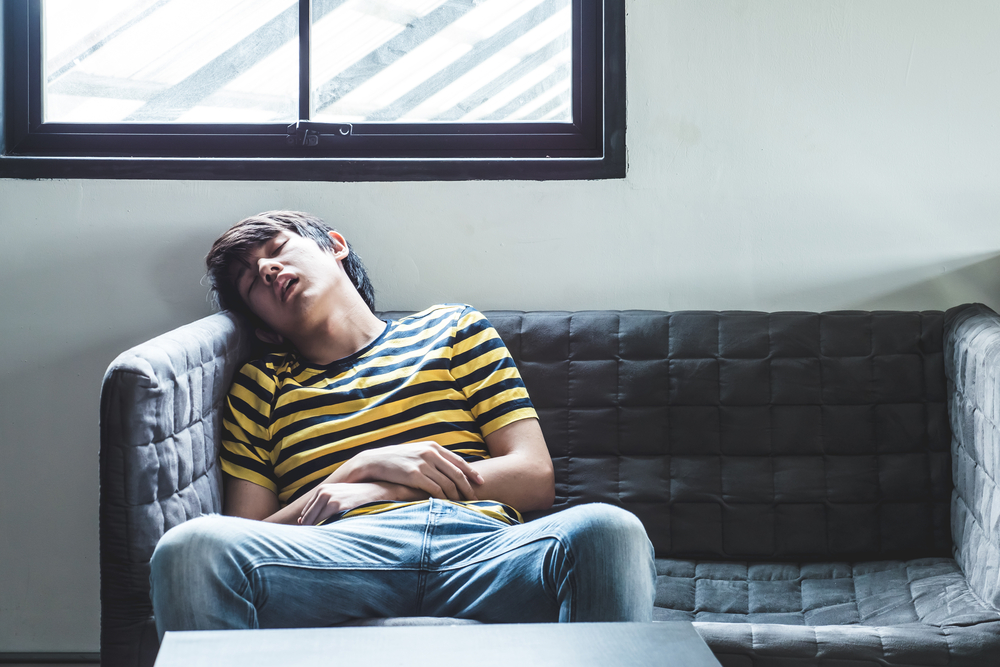 We’ve all experienced it before – you’re smoking a killer strain or having a fantastic edible, you’re vibing out on your couch watching your favourite show, documentary or sporting event and all of a sudden, getting up and leaving your couch is almost impossible! If you’ve had this happen to yourself before, you’ll know what we’re talking about; it’s couch lock.

A slang term used by stoners and tokers worldwide, the couch-lock effect is one that almost every cannabis user will be familiar with. While some people enjoy the effect and specifically seek out cannabis strains that can give them the couch lock experience, others actively try to avoid it.

If you’re new to the smoking scene, you might not have had the fortunate, or misfortune, of this happening to you. Today, we’ll explain what couch lock is, our tips on how to avoid couch lock and what you can do to get yourself through it!

What is Couch Lock?

As the name implies, Couch lock is a colloquial term used to describe the feeling of being physically ‘locked’ to your couch.

The experience is hard to describe for non-cannabis users. After all, how hard is it to stand up and leave your couch? Indeed, getting up to grab a beverage or a snack cannot be that difficult of a task. In reality, you have to experience couch lock to understand just how powerful the effects are.

Couch lock isn’t just a physical sensation; it’s also a mental one too. In addition to your body feeling incredibly tired, your mind and mental are also a bit out of wack.

Your limbs will feel incredibly heavy, and despite all the desire in the world to get up, your mind won’t be able to communicate with the rest of the body to bring your vision into reality. It’s almost like being completely numb, yet fully aware that you can move and get up at any time, but just not being able to for whatever reason.

The causes behind couch lock are different for different people.

For many, cannabis strains with strong sedative properties and a high THC content, such as Northern Lights and Rockstar are enough to do the trick.

Most of the time, these are indica strains – strains that are known for producing strong “body highs.”

Unlike sativa strains, indica strains are sought out to treat insomnia and other bedtime issues. Some cannabis users will even smoke up an indica dominant strain before bedtime to ensure restful sleep!

However, the differences between indica vs sativa actually aren’t that large.

When cannabis was first discovered, scientists needed a way to put different strains into neat little boxes. Since sativa and indica looked physically different, it was easy to name the shorter and stockier variety an “indica” and the taller, bushier one “sativa.”

While indicas are a known sedative, plenty of sativa strains can cause couch lock, too, such as Tuna Kush.

So, to conclude, as long as a strain has a sedative effect, it’s likely that it’ll cause couch lock.

RELATED: Indica vs Sativa – Are They Really That Different?

But what if we take a more granular look?

Cannabis terpenes, active compounds responsible for producing aromas and flavours within cannabis and other plants, could be the missing piece.

Cannabis connoisseurs will already know that a strain’s chemical profile will affect the experience of a particular strain can deliver due to the entourage effect.

Still, fewer will recognize that myrcene, a terpene found within mango and weed, is the main culprit behind weed’s sedative effects.

With that being said, myrcene might not be the only culprit behind weed’s couch locking effects. While high concentrations of myrcene can indeed cause sedation, other cannabinoids such as CBG, CBN and even CBD in combination with myrcene can also induce couch lock.

The physical sedation brought on by cannabis in combination with the strong psychoactive and euphoric effects of THC make weed extremely effective for insomnia and pain relief but can also make you incredibly stoned and locked to your couch.

Right now, there is no clear culprit behind couchlock, but we can be sure that it’s a combination of the following compounds and chemicals:

How to Avoid Couch Lock

Our favourite cannabis strains and weed products deliver their effects by acting on our endocannabinoid system. Also known as the ECS, this natural bodily system produces, removes and manages the levels of endogenous cannabinoids in our bodies to control various bodily functions.

In other words, our body naturally produces cannabinoids and uses them to control everything from sleepiness and energy to hunger and mood.

Everyone’s ECS will be different, so there’s no clear-cut way to avoid couch lock, except with experience.

With that being said, there are some things you can still look out for if you want to avoid the sensation!

We know, we know, we said that sativas causes couch lock and this is still true. Generally speaking, however, unless you’re hitting up sativas that are known to induce couch lock, this won’t be the case.

Sativas are known to produce a euphoric high, not a relaxing one. If you’re worried about sativas causing couch lock, just ask your budtender to clarify the effects a strain will have on your energy levels. They’ll steer you in the right direction.

Everyone wants a strain with a THC level. It doesn’t matter what flavour, aroma, or effects a strain has – many will look to the THC level first and treat everything else as secondary. While this isn’t a bad way to look at weed,per see, it’s not the best. Weed is so much more than THC.

However, if you want to avoid getting couch-locked, lower THC levels can keep the psychoactive effects under control and keep you from getting too high. Avoid super-potent strains and you should be in the clear.

Sounds obvious enough, right? You would think so, but considering how many people end up sitting down and not getting up again until a few hours later because they’re so couch locked, it might not be as obvious as you think.

Instead of sitting down to smoke and enjoy your high, consider going outside for a walk or engaging in some ganja yoga. In addition to boosting energy levels, physical activity keeps you off of your couch and out of the house. Keeping your heart rate moving is the best way to avoid falling into a sedative slump!

How to Treat Couch Lock

Ok, so we’ve covered how to avoid couch lock, but how do you treat it when you’re actually going through it? Here are a few things you can do to get you through the couch lock experience.

Caffeine is great. You could even say the world depends on coffee and other energy drinks sold legally to get them through the day. Drinking a cup of joe, a mug of tea or even a can of red bull can help provide the energy boost you need to break free from the couch and get on with your day. Soft drinks with caffeine in them, such as Mountain Dew, are also a great choice since they can spike your insulin levels with their sugar content and get your body moving.

READ: Why do Edibles Hit so Hard? This Tiny Compound Might Just be the Main Culprit

Have Someone Help You Up

The hardest part of getting something done is getting started. If marijuana has sucked the life out of your body, you can ask a friend to help you jumpstart the process by getting you on your feet. Once you start standing up, you’ll start feeling better and more able to ride out the high.

CBD, also known as cannabidiol, is a cannabinoid known for its rejuvenating and healing effects. In addition to combating anxiety, mood disorders and pain, CBD can also be used to counteract the effects of THC. It’s able to do this by blocking THC from connecting with our endocannabinoid system’s CB1 and CB2 receptors.

Using some CBD tinctures, edibles or even vapes could be the difference between spending an evening locked to your couch or actually enjoying your high!

Love it or hate it, couch lock is just a part of the cannabis experience. While you can’t eliminate the chances of it happening completely, you can take steps to reduce the likelihood of it happening to you. Just remember to stay away from potent indica strains, stick to lower THC levels and experiment with different strains to find one that’s right for you!