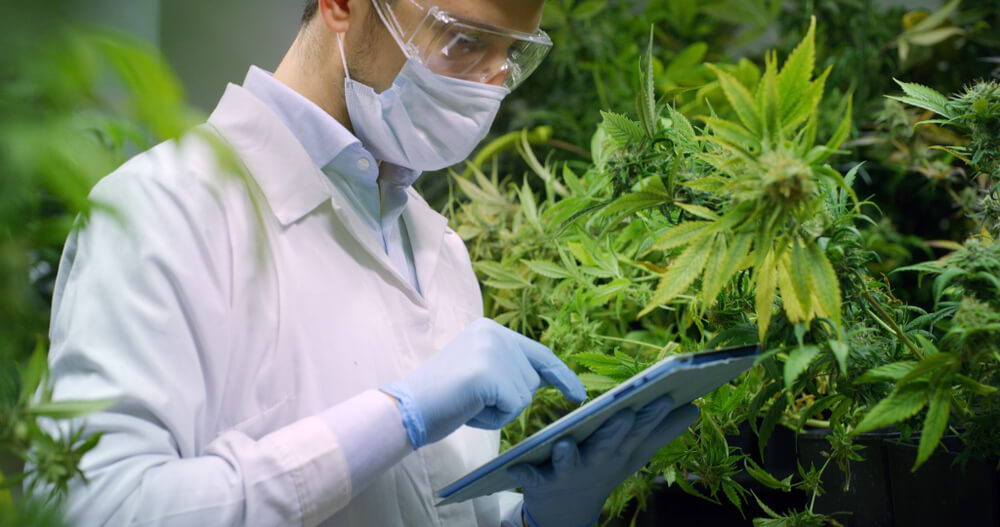 What are terpenes? Looking for a terpene chart?

If you find cannabis’ different aromas as enjoyable as the experience it creates, then it’s time to ask, what are terpenes, exactly?

There’s more than meets the nose when it comes to how weed smells!

Today, we’ll break down what causes each cannabis strain’s unique scent along with how they each affect our individual experiences.

What are Cannabis Terpenes?

A terpene is a type of organic molecule called a hydrocarbon (hydrogen + carbon). Marijuana terpenes make up most of the essential oils found in many plants, such as conifers (aka Pines).

Cannabis plants aren’t alone in having them. Many different plant and insect species produce terpenes as a defence mechanism to protect themselves from predation by animals, other insects, and bacterial and fungal infections.

In the case of humans, cannabis terpenes tend to have the opposite effect.

Terpenes should not be confused with terpenoids. Terpenoids have a more complex molecular structure than terpenes since they commonly contain oxygen, hydrogen and carbon atoms.

Terpenes and Trichomes: What’s the Difference?

Another word that’s familiar with cannabis culture is “trichome.” Trichomes are the hair-like bulges you see on both the buds and all cannabis plants’ leaves. Trichomes are responsible for the plant’s crystalline appearance.

Interestingly, like terpenes, trichomes’ purpose is to protect plants from a wide range of harms like ultraviolet light, transpiration, and freeze intolerance.

If you’re wondering why this is important to cannabis users, it’s because trichomes are responsible for producing essential oils containing both THC, CBD and many other cannabinoids.

The production of terpenes is actually increased with extended exposure to light.

Consequently, the more light a cannabis plant receives, the more trichomes it will develop and, in turn, the more THC, CBD and other cannabinoids it will contain. Plus, due to the increased production of terpenes, the stronger its aroma will be!

Like cannabinoids, there are over 100 different known terpenes found in cannabis plants.

While the differences are often subtle, scientists have made considerable progress classifying the different types and effects they have on weed.

After that, they’re subdivided into other categories such as fruity, flowery, citrus, dairy, warm, sharp, vegetal and nutty.

So, a cannabis strain with a “sour” smell such as Lemon Skunk or Lemon Haze may have a strong lemon scent. This sour smell usually indicates a Sativa strain that provides consumers with an energetic euphoria.

Once you’re familiar with the different terpene types, you can tailor your weed experiences to your liking!

Looking for something uplifting? A strain high in pinene is your best bet. Want to kick back and relax? If so, the myrcene terpene is more your jam.

Now that tokers are becoming more aware of the effects of different types of terpenes, they’re also becoming aware that terms such as sativa, indica, and hybrid have very little to do with genetics and a strain’s psychoactive effects.

Instead, consumers are now turning their attention to marijuana terpenes as well as rare cannabinoids such as

as indicators of how a particular strain may affect them.

How Terpenes Affect Your Cannabis Experience

The first step is to become aware of the most common types of terpenes and their effects.

For instance, myrcene is the most common terpene found in cannabis and is often referred to as the “couch-lock” terpene due to its sedative effects.

However, some users may find that myrcene actually dampens mental and physical energy and is not the best choice for pain and anxiety relief.

As with weed, terpenes can affect different users in different ways. For instance, phytol has energizing and creative effects while, for others, it behaves more like linalool by inducing a calm, relaxed state.

Terpenes Chart of the Most Common Cannabis Terpenes

Click on the terpenes chart for a deeper dive into which strains contain these terpenes the most, their benefits, and what to expect!

Humans have used nerolidol for decades to reap its relaxation and soothing properties. Beyond being a food-flavouring agent, it is also a therapeutically beneficial biological compound.

Nerolidol is in ginger, jasmine, tea tree, lavender, and lemongrass.

Studies have shown that nerolidol has anxiolytic (anxiety-reducing), antioxidant, antifungal, and antibacterial properties.

Related: What is nerolidol and what does it do?

Phytol is found all over the plant kingdom.

A few examples of plants that produce it in significant amounts include citrus fruits, lettuce, and green tea. It is especially potent inside matcha and sencha tea varieties.

Other food sources not included in our terpenes chart that are high in phytol include legumes,  yeast, legumes, pork, and enriched grain products.

Related: What is phytol and what does it do?

Linalool is common in the plant kingdom. There are over 200 different plants that produce linalool naturally. A few examples include rosewood, thyme, basil, birch trees, and jasmine, but it’s most recognizable in lavender.

If you’ve ever used a floral cleaning product, drank floral tea, or used a medicative home-remedy, the chances are that it had a bit of linalool in it!

Linalool is added to many foods, and annually, the average person will consume about 2 grams of it per year.

Linalool is known to have a calming and soothing effect, which is why it’s included in many of our day-to-day products and foods.

Related: What is linalool and what does it do?

Myrcene, or beta-myrcene, is found in numerous plants as well as cannabis. Many different foods and herbs also contain this terpene, including mangos and hops.

Like many of the terpenes present in cannabis, myrcene is non-toxic. It is often used in recipes as a flavour additive due to its fresh, citrusy notes coupled with hints of spice.

Since it’s so common, you’ve probably eaten far more myrcene than you ever realized!

Myrcene also has pain-relieving and sedative effects, which is why it’s so common in indica strains.

Related: What is myrcene and what does it do?

Limonene is the freshest, most citrus-y terpene in weed.

For plants, limonene serves a protective role against specific threats. Plants use this terpene to repel insects and other harmful bugs. The cannabis plant very likely produces limonene for the same reason and several other essential functions.

Limonene is commonly used due to its pleasant and stimulating aroma.

This terpene has anti-inflammatory characteristics that are helpful in various conditions, including arthritis, asthma, and skin conditions. As far as the skin goes, limonene is also thought to help fight against acne.

Related: What is limonene and what does it do?

You’ve probably pinene before in numerous essential oils over your lifetime. Of the all terpenes found in weed, pinene is by far one of the freshest scents.

In the plant kingdom, pinene is found all over the place. Examples include cedar, conifer trees, dill, orange, parsley, pine trees, rosemary, and eucalyptus. Pinene is actually one of the most common terpenes found in nature.

In weed, cannabis strains high in alpha-pinene are thought to encourage anti-inflammatory effects, especially when combined with CBD.

Related: What is pinene and what does it do?

The full name of this terpene is β-caryophyllene, and much to your potential surprise, you can likely find plenty of it in your kitchen. In fact, caryophyllene can be found in basil, cloves, black pepper, and cinnamon.

Beta-caryophyllene has a woody, spicy, and peppery aroma. It is very similar to the smell of black pepper overall.

As our terpene chart shows, any strain with high levels of this terpene will have a peppery scent and offer tokers pain-relieving and anti-inflammatory effects.

Related: What is caryophyllene and what does it do?

So, now that you’re aware of how terpenes combine with cannabinoids produce different psychoactive effects, you’ll have a far greater understanding of how to choose particular strains that you’ll find most enjoyable!

The next time that you visit your favourite online dispensary, rather than asking the budtender for an indica or sativa dominant strain, you should instead focus on the aroma and let your nose guide your decision.

If you’re not sure of what to expect from each smell, just refer to our terpenes chart for more information!

Chances are if a particular strain appeals to your sense of smell, then it also may provide an appealing experience.

Once you’ve gained experience with associating general scents with the effects that you find pleasant, then you can progress to learning to associate the more subtle aromas with more subtle effects.