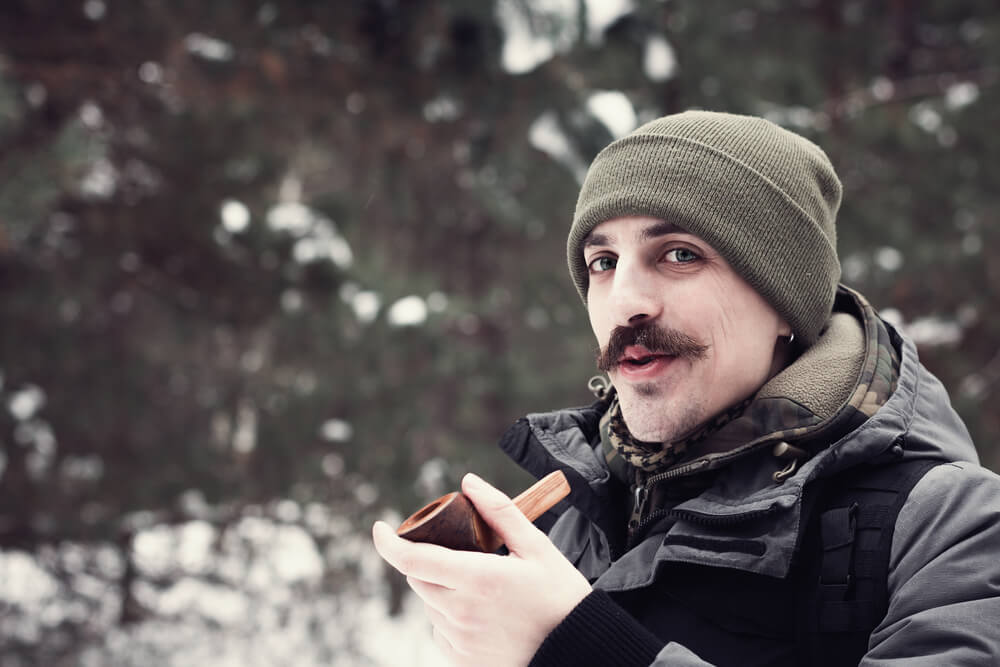 We get it; smoking during winter doesn’t really compare to a summer smoke sesh, but believe us when we say that smoking outside during winter has its benefits!

It’s plain to see why burning one down during the hot, sweltering summer months is so great. It’s gorgeous outside, you can smoke anywhere, and there’s plenty of things to do afterwards once you get lifted.

Compared to smoking during winter, the cold weather more or less prohibits walking and standing outside for long periods, it’s dark and dreary out, and there’s not much you can do when in the blistering cold.

If you’re staying inside and using a THC vape pen to get lifted, hey, all the more power to you, but for those fellow tenacious tokers out there, we know that smoking during winter months has its own frosty appeal.

Yeah, weed is legal across Canada, but that doesn’t mean you can spark one up on the street or at a busy place with lots of people around you.

Well, you could, but that wouldn’t be too courteous towards others and not something we’ll recommend doing if you respect cannabis culture.

We love smoking weed and being outside at the same time. The problem? Other people enjoy being outdoors, too, and it can be hard to find a good sesh spot when everyone is enjoying the sunshine. We can’t begin to count the number of times we’ve summited a hike and started preparing for a sesh only to have a family of four stopped by.

Smoking during winter means that there will be far fewer people outside and more opportunities to visit your favourite smoke spots and locales.

When we say discreet, we don’t mean to say that passersby will mistake your dank clouds for cold breaths of condensation; we mean that weed smoke becomes harder to smell. Due to thermodynamics and how molecules behave, odour molecules move and dissipate faster in the summer when it’s warm out, but the cold weather has more of an impact than you might think.

When it’s cold, odour molecules move slower, which means that the pungent Sour Diesel you’re smoking won’t be picked up by people just walking by.

Additionally, the cold air also retracts our olfactory receptors, the parts in our noses responsible for picking up odours. Weed smoke literally becomes harder to smell, among other things. Smoking during winter? You won’t have to worry about anybody smelling your loud!

We don’t know about you, but we found that the hot, humid air during the summer season causes some heavy irritation when introducing weed smoke into our lungs.

When we’re smoking during winter, the crisp, cold air feels amazing. Maybe it’s anecdotal, but the experience is similar to packing a few ice cubes into our bong to make the smoke colder. Is the smoke colder? We don’t know, but it certainly does help.

Are you in an area that has a lot of snow? The next time you burn a joint down, try packing some snow into your palm and make a fist. Hold your joint between your index and middle finger and make a small opening in your fist with your index finger and thumb. This creates a hand-pipe, and the ice in the middle will actually cool the smoke down!

Smoking During Winter – Worth a Shot

If you’re not all cooped up and cozy indoors smoking a vape, we highly recommend stepping outside into the winter wonderland and burning one down.

The experience is different from smoking during the summer, but that isn’t necessarily bad. We love smoking during the colder months and enjoying the peace, quiet, and serenity that fall and winter bring to our smoking environment.

Haven’t tried it yet? We hope these three reasons are enough to spur you into action!