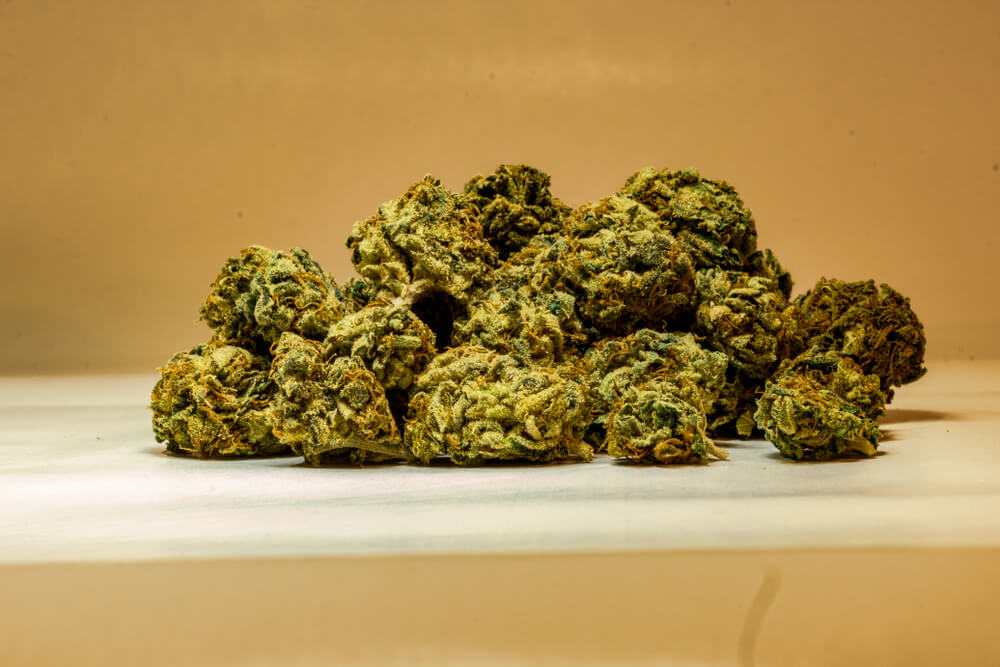 Pineapple Express has become a household name in the wonderful world of weed for old and newcomers alike.

The name is synonymous with premium quality, potency, and playfulness that made its way to the mainstage via the hilarious comedy duo Seth Rogen and James Franco in their stoner movie classic with the same name.

Combining the potency and flavour fusions of its parent strains, Pineapple Express is a tropical triumph that will take your mind on an epic journey while providing your body with a mellow and relaxing buzz.

Today, we’re giving you the complete rundown of this legendary strain. So, without further ado, let’s get into it!

What is Pineapple Express?

Pineapple Express has been around for a while, but it’s no surprise as to why it’s experienced a massive resurgence in popularity in recent years.

Thanks to James Franco and Seth Rogen, this sativa-dominant hybrid strain was put back on the radar of stoners of every skill and experience level when their comedy movie of the same name came out in 2008.

That said, there are also several growers and seed banks who each claim to have created the “true” Pineapple Express.

The strain itself is the byproduct of crossbreeding the sativa-dominant strains Trainwreck and Hawaiian. Pineapple Express combines these genetics to produce a potent and powerful hybrid with long-lasting effects.

In other words, it puts the ‘high’ in hybrid!

Most Pineapple Express cuts are noted for their fluffy, popcorn-like weed flowers with olive green, lime and yellow colouring. Its aroma is indicative of its name, releasing citrus fragrances from its typically high concentrations of the terpene limonene.

Let’s get one thing clear. This strain has serious bag appeal.

The smell is overwhelmingly tropical, with notes of fresh-cut pineapple and mango and hints of green apple and pine.

Pineapple Express will delight and ignite your senses from the moment you open the bag before even lighting it up!

If the smell isn’t enough to draw you in – which we highly doubt it won’t be – its flavour surely will. Pineapple Express stays true to its name through and through. In other words, it tastes as good as it smells! The strain has a cedar and pine flavour that compliments the sweet tropical citrus notes incredibly well.

Many tokers will say that it leaves a sweet aftertaste in your mouth that is reminiscent of fresh mangoes and, of course, pineapples.

What is it Good For?

Pineapple Express is a Jack of All Trades when it comes to the versatility of use. While it is widely celebrated as a potent and powerful recreational cannabis strain, it’s got medical benefits to boot!

In other words, there’s really nothing this strain can’t do. If you’re a fan of sativas, it’s a definite must-try.

While we’ll dive into the overall effects a little later on, the strain itself supplies stimulating cerebral properties.

Sativa strains are known to produce an uplifting euphoria that is fantastic for heightening your mood and combatting symptoms of depression, stress, anxiety, fatigue and restlessness.

This hybrid also possesses minor sedative qualities, providing a relaxing body high to help alleviate inflammation and pain, including for those with migraines and muscle tightness.

Many users appreciate this strain because it is a well-balanced sativa-dominant hybrid, meaning that it provides healing properties and uplifting benefits without producing any heavy side effects.

Will it Get You High?

Let’s put it this way – would Seth Rogen and James Franco have made a movie about a weed strain that didn’t get you high?

Probably not. So, there’s your answer.

Not only will Pineapple Express get you high, but it will get you sky-high!

This strain has THC levels ranging from 25-27%, so you’re bound to feel its effects in one way or another.

However, it’s important to point out that, while the movie is full of ridiculous and crazy antics, Pineapple Express’s effects aren’t as powerful as the movie implies.

That said, it does produce a pleasant, mild body buzz accompanied by a delightful, airy head high that will make users feel uplifted, euphoric and chatty.

In this sense, Pineapple Express is an awesome strain for being social and for toking up solo!

Not only that, but it will also engage your creative side and help you feel focused and more inclined to be productive.

Who doesn’t want that?

Coupled with its energizing sativa properties, Pineapple Express is the perfect addition to help you tackle your day’s to-do list.

All Aboard the Pineapple Express!

With its uplifting, energizing properties and its mildly sedative body effects, this strain does it all!

While the singular claim to fame title hasn’t been 100% proven, whoever created this epic hybrid has our thanks.

Whether you want to wake and bake, need a pick-me-up in the afternoon, or want a boost of focus to enjoy your favourite movie at the end of a long day, there’s something for everyone with Pineapple Express!

If you’re looking to get your hands on some, hop on over to our website to see this and many other dry flower strains, cannabis concentrates, edibles, topicals and more to take your high to new heights!