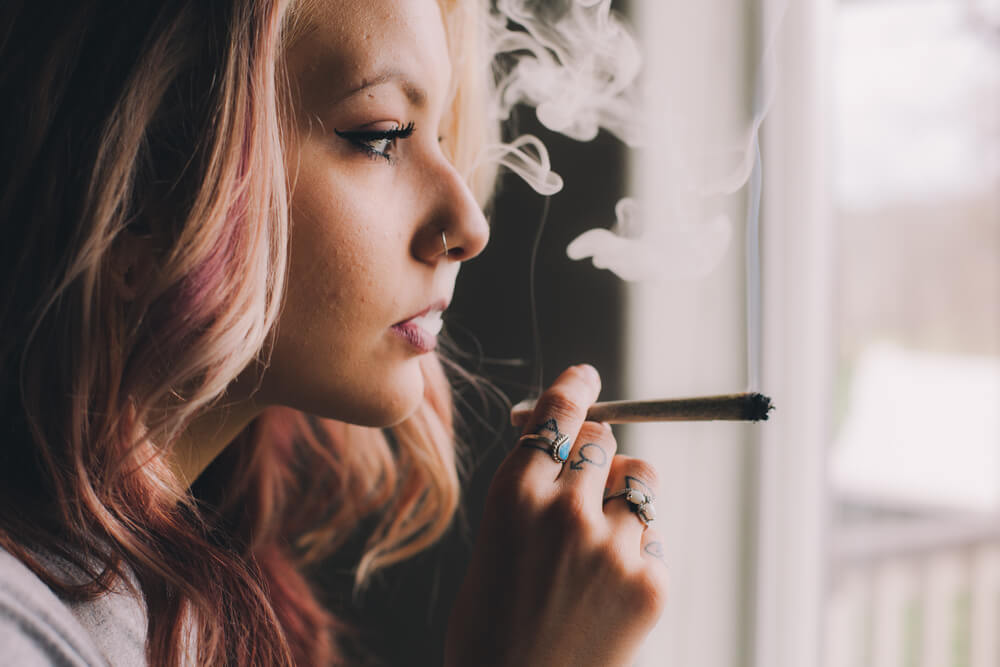 By now, the general consensus is smoking cigarettes is not only bad for your health, but it’s also bad for your skin, so does smoking weed cause acne, too?

Considering that cigarettes and marijuana are both commonly smoked, it might bring a few concerns to the table. Does it cause any skin conditions? Will it make me break out? While these might be some very valid concerns, smoking cigarettes and smoking weed are very different things.

So, if you’re interested in finding out more about the effects of marijuana on skin and acne, then keep on reading.

Does Smoking Weed Cause Acne?

First and foremost, the cannabis plant is complex. We’ve only recently begun to research the compounds within it, so the amount of information about how cannabis affects us remains relatively limited.

That said, we do know that the compounds in cannabis differ significantly from those found in tobacco. While there is currently no concrete evidence that smoking marijuana can cause acne, smoking weed is known to produce several effects that might inadvertently affect the skin.

These effects could be behavioural changes due to the high, hormonal changes in the body or even adverse effects from the smoke itself.

Some of the most noticeable culprits are:

Thanks to the munchies, smoking weed is usually accompanied by binging large quantities of junk food typically laden with simple carbs or oily fats. Make no mistake about it. The foods that weed has you gravitating towards are by no means helpful when maintaining clear skin.

In fact, eating tons of food high in refined carbs and fats may actually lead to inflammation, resulting in the body producing increased amounts of sebum, which can clog pores and make acne worse.

Sebum is basically oil that the glands in the skin produce. You might already be familiar with sebum, as whitehead pimples are formed when a pore is clogged or blocked by it.

Of course, this can all be easily avoided if you learn to control your appetite or opt for healthier foods instead once the munchies take hold.

One of the most acne-prone phases in the average person’s lifetime is during puberty, when the body undergoes a series of drastic changes accompanied by an onslaught of hormones. During this time, hormones like testosterone skyrocket, increasing the amount of sebum produced and potentially causing a lot of acne, as well.

While there isn’t much research on how marijuana directly affects hormone levels, we can probably infer that the increase in testosterone has some sort of effect.

The act of smoking weed isn’t directly linked to making acne worse. However, there is evidence that smoking itself can cause damage to the skin.

The research shows that smoking not only speeds up the ageing of the skin but it can also reduce blood flow to it and cause inflammation as well.

In reference to tobacco, specifically, you’ll likely notice that people who smoke it tend to have more fine lines and wrinkles compared to those who don’t. This difference is due to the effect tobacco has on collagen content in the skin.

Collagen is a natural protein responsible for skin looking plump and promoting elasticity.

However, it’s not entirely clear whether weed has the same effect.

So with all of that out of the way, is weed okay for the skin? The opinions and facts on this are actually a pretty mixed bag. On one end, you’ll find people claiming that weed is the core cause of acne, while on the other, there is a strong argument that the plant has nothing to do with acne.

The truth is, there just isn’t enough research on such a specific topic where we would have a definitive answer.

Along with the lack of research on the topic, one of the core causes of acne is genetic factors, something many people do not like to include. For example, some people may be able to get away with smoking cigarettes, eating oily and processed foods, and still have amazing-looking skin.

That said, there currently isn’t any evidence linking any of the cannabinoids in marijuana to acne flares-ups whatsoever. Though the link may be direct, as we outlined previously, there are some indirect causes of acne that marijuana may produce.

Additionally, some sources indicate that weed may potentially keep sebum at bay.

Another review posits that topical marijuana cannabinoids may also produce anti-itching and anti-inflammatory effects for other skin conditions, including eczema.

Perhaps the most pertinent factor that draws many people to cannabis topicals is the minimal to no high associated with using these products. Instead, they can provide soothing relief for a wide range of conditions, including psoriasis, rosacea, arthritis, and even bug bites.

Cannabis Topicals – A New Way To Use Cannabis?

If you’re interested in achieving comfort, relaxation and therapeutic benefits, check out the Herb Approach website for our extensive list of available cannabis topicals to find the relief you need!

How to Keep Your Skin Healthy While Smoking

Smoke, in general, is known to be damaging to the skin. Unfortunately, for those who enjoy the experience of inhaling weed smoke, there is no ideal workaround except for changing the way you consume your cannabis.

For example, aside from smoking weed, edibles might be an excellent alternative. You achieve the psychoactive effects of weed without inhaling any smoke whatsoever.

If smoking isn’t something you’re likely to give up any time soon, as we said above, cannabis topicals are also known to provide significant relief to localized areas of inflammation. With strong anti-inflammatory properties, you can also use topicals to soothe the skin’s affected areas in a fast-acting manner.

One of the most popular cannabis and hemp-related products used to fight the battle against acne is CBD oil, as there is evidence to suggest that it may help control it.

In fact, many people use CBD oil on the breakout itself or ingest it orally to help alleviate stress and reduce the risk of developing more. CBD oil also adjusts the way the body produces sebum, which can help reduce acne in the long run.

While smoking cigarettes is commonly known to deteriorate health and affect the skin negatively, there is no direct causal link that would imply that cannabis would do the same.

Even though research is still in its early stages, none of the cannabinoids found in the cannabis plant have been linked to acne flare-ups.

However, this does not mean that weed use will guarantee healthy skin, as several side effects of marijuana use, such as succumbing to the munchies with junk food and increased testosterone levels through repetitive use, may influence the skin itself.

That said, some components to the cannabis plant, like CBD oil and other topical products, may actually help reduce stress, inflammation and inhibit sebum production, which can also help combat acne.

The best way to keep your skin healthy would be to diversify your ingestion methods. In other words, if you’re a classic smoker, maybe broaden your horizons to the many other cannabis-infused products available on the market, such as edibles and topicals.

Your skin and the rest of your body will thank you.