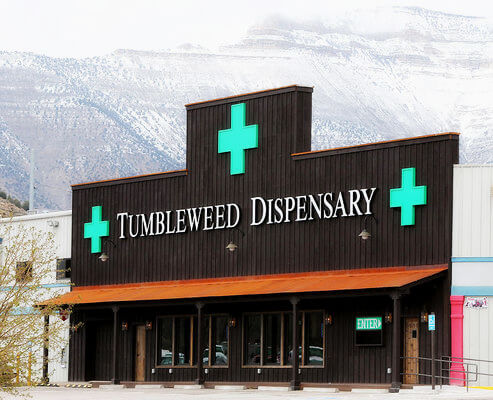 The doors — or rather, windows — will soon open on 4/20 for Tumbleweed Express, the nation’s first legal drive thru marijuana dispensary.

Located in a converted car wash space in Parachute, Colo., the dispensary will sell weed from 4 p.m. to midnight on the weekends, giving buyers late-night access. Naturally, the shop is planning to open on April 20, better known as 4/20.

“I didn’t set out thinking this would be national news,” CEO Mark Smith told the Glenwood Springs Post-Independent. “I didn’t have some big epiphany. There was just a need for our customers.” Smith is the latest in a line of cannabis entrepreneurs, including celebrities like Whoopi Goldberg and Snoop Dogg, taking advantage of increasing mainstream interest in weed consumption.

The drive-thru counter is subject to the same strict regulations as all other recreational marijuana dealers. Namely: no one under the age of 21 is allowed on the premises; in this case, that includes the back seats of cars. And the substance is not allowed to be visible from outside the dispensary. Security measures must also be in place.

Keeping Parachute in the Air

But for the town of Parachute — population 1,100 — marijuana sales are an important component of the local economy. Last year accounting for nearly 30% of the sales tax revenue. Cannabis sales have also been contentious, with a ban in place prior to 2015. With the weed market booming across the state, however, Parachute appears to be joining the bandwagon.

“We think the drive-through is a very creative and innovative idea,” Parachute Town Manager Stuart McArthur said in February when the store’s business license was initially procured, according to the Post-Independent.

The state’s Marijuana Enforcement Division added that it was not aware of this business model “ever coming up before,” giving the shop its claim to fame.