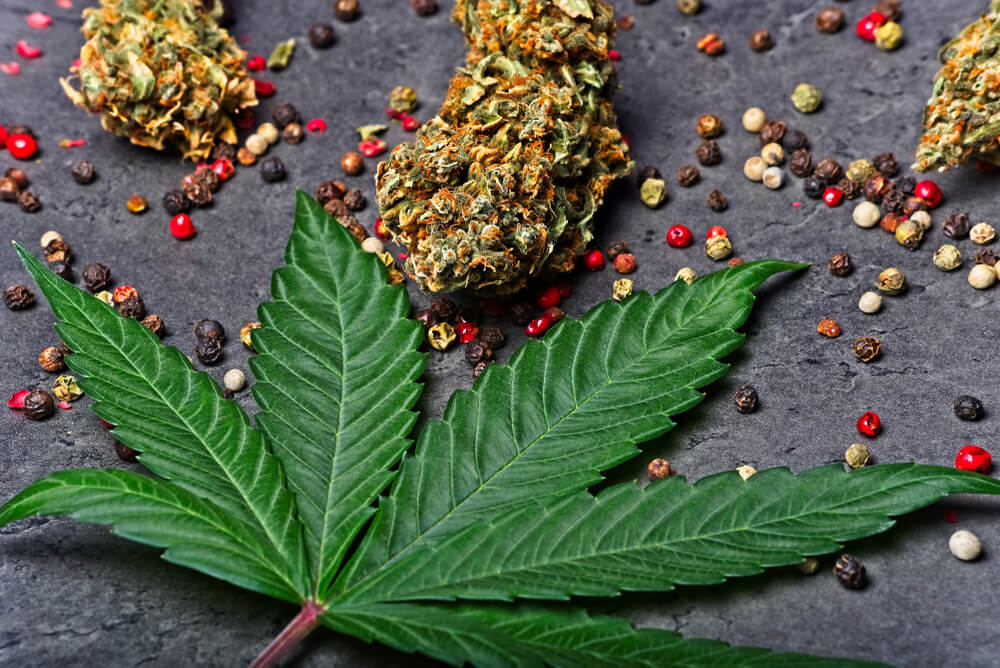 With over 150 terpenes present inside the cannabis plant, it can be overwhelming to try and tackle them all at once, so we’ll take it one step at a time by discussing caryophyllene specifically today.

Terpenes are widely known to be the scent and flavour-producing compounds in weed, but they are so much more than that. In this article, we’ll get to the bottom of the research behind caryophyllene to discover why it is one of the most intriguing out of the bunch.

We’ll give you a hint: caryophyllene has more in common with cannabinoids than just about any terpene as far as we know right now.

This guide will help you understand what this caryophyllene is, where it comes from, what it’s used for, and its effects.

So, let’s jump right into it!

The full name of this terpene is β-caryophyllene, and much to your potential surprise, you can likely find plenty of it in your kitchen. In fact, caryophyllene can be found in basil, cloves, black pepper, and cinnamon.

Caryophyllene, along with β-myrcene, is undoubtedly the most common terpenes in the C. Sativa L. plant. Next time you go looking for some new bud, take a look at the terpene content, and you’ll find this terpene all over the place.

Beta-caryophyllene has a woody, spicy, and peppery aroma. It is very similar to the smell of black pepper overall. Any strain with high levels of this terpene will have a peppery scent. While the variety of terpenes produced by the cannabis plant is vast and unique, the potential of caryophyllene stands out above the rest.

Is Caryophyllene a Cannabinoid?

Technically, researchers now consider caryophyllene as belonging to the class of phytocannabinoids. This classification means that it is considered to be structurally and functionally similar to other cannabinoids like THC and CBD.

Based on the effects of CB1 and CB2 receptors, we can see why beta-caryophyllene does not produce any ‘high’ or psychoactivity. As mentioned, CB1 is not impacted by these terpenes, but CB2 is.

If beta-caryophyllene is able to impact CB2 in similar ways to CBD, the potential benefits will be widespread, such as pain-relieving and anti-inflammatory impacts. Thankfully, caryophyllene is widely found in cannabis and has the ability to bind with CB2.

Researchers have been making a case for therapeutic caryophyllene usage for years, with claims that caryophyllene is a dietary cannabinoid dating at least as far back as 2008.

These researchers considered caryophyllene to be a functional non-psychoactive CB2 receptor ligand in food products.

Ligand is the scientific term for a compound that can dock or activate specific receptors (in this case, CB2).

Where does Caryophyllene Come From?

As mentioned above, caryophyllene is naturally produced by a variety of spices you’ll find in your kitchen. Black pepper is the most commonly mentioned spice that possesses this terpene, but the list also includes basil, close, cinnamon, rosemary, and oregano.

Caryophyllene can be found in high levels in numerous essential oils. Beyond the food sources described above, this terpene is found in multiple other home products. The terpene has a unique ability to bind to the endocannabinoid system, which is what makes it so much more than just a terpene.

One day, caryophyllene may also be considered to be a phytocannabinoid like THC and CBD.

Whether strains with high levels of caryophyllene may provide additional health properties is an area of research we look forward to seeing.

If future studies support the impact of this terpene on CB2 receptors, we may finally learn how effective this naturally produced compound is in cannabis plants.

Based on these effects, you can see why so many manufacturers would include this terpene in essential oil formulations and other health products. Beta-caryophyllene is widely found in the plant kingdom and in health food stores. It is also found throughout cannabis retail stores as one of the most common terpenes in cannabis strains.

While not all strains possess it, many do. Caryophyllene is also found in hops, though we do not know the impact of this terpene in beer, sadly.

Further research will help us learn more about the potential for beta-caryophyllene to slow tumor growth and proliferation. If the positive indications in rats carry over to humans, we may develop a new option in the fight against cancer.

While we await this research, you can feel good about loading up your plate with black pepper.

In terms of reducing pain, beta-caryophyllene appears to be helpful in the battle against neuropathic and inflammation-related pain. Neuropathic pain is incredibly difficult to treat and severely impacts far too many people around the world.

There is some evidence to support the claim that beta-caryophyllene can help reduce the number of those suffering from neuropathic pain.

In regards to the entourage effect, which suggests that cannabinoids and terpenes function synergistically to enhance effects, caryophyllene presents a unique example. While other terpenes do not interact directly with our endocannabinoid system (ECS), caryophyllene does have a weak ability to interact with CB2.

This is why caryophyllene is one of the most interesting targets of research into the entourage effect.

The effects of having this terpene present in the bud you smoke appear to be beneficial. Just like the other terpenes, this one interacts with other receptors throughout the body to produce effects such as scent.

However, this terpene appears to be the most promising one to support the entourage effect hypothesis compared to other terpenes.

Based on studies demonstrating how beta-caryophyllene interacts with the CB2 receptor, we suspect that it may enhance the anti-inflammatory and pain-reducing effects of various cannabis strains.

While further research helps us clarify this situation, cannabis consumers seeking these effects should give beta-caryophyllene cannabis strains a try.

Give these trains a try if you want to experience anti-inflammatory and pain-reducing effects for yourself.

In summary, the terpene caryophyllene is one of the most fascinating terpenes found in cannabis due to its unique properties. As we’ve learned, this terpene plays a big role in the properties of certain cannabis strains.

While its specific interactions with cannabinoid receptors cannot get you high or produce a psychoactive effect, it may help relieve pain and assist with anxiety.

In this way, strains such as Bubba Kush, GSC and Sour Diesel with high caryophyllene could be beneficial for those seeking pain-relieving properties.

Whether it is the potential anti-cancer, anxiety-reducing, inflammation-reducing, or other impacts of caryophyllene that entices you most, these are all exciting potential uses for caryophyllene in medicinal cannabis.

The benefits are certainly worthy of future study and we look forward to seeing these potential benefits supported by further evidence. In the meantime, find a strain variety with high levels of this terpene to assess the benefits yourself.

While we await future research, grab some bud with caryophyllene, and give it a try next time you want to get high.

ABOUT US
Herb Approach News is the media division of Canada's premiere online dispensary Herb Approach. We provide everything interesting cannabis related, from news on current events to practical guides on consumption and more. Our goals are to educate and inform readers so they can make the best decisions in seeking medicinal cannabis products, while also changing the stigma of cannabis use.
Contact us: [email protected]ch.com
FOLLOW US