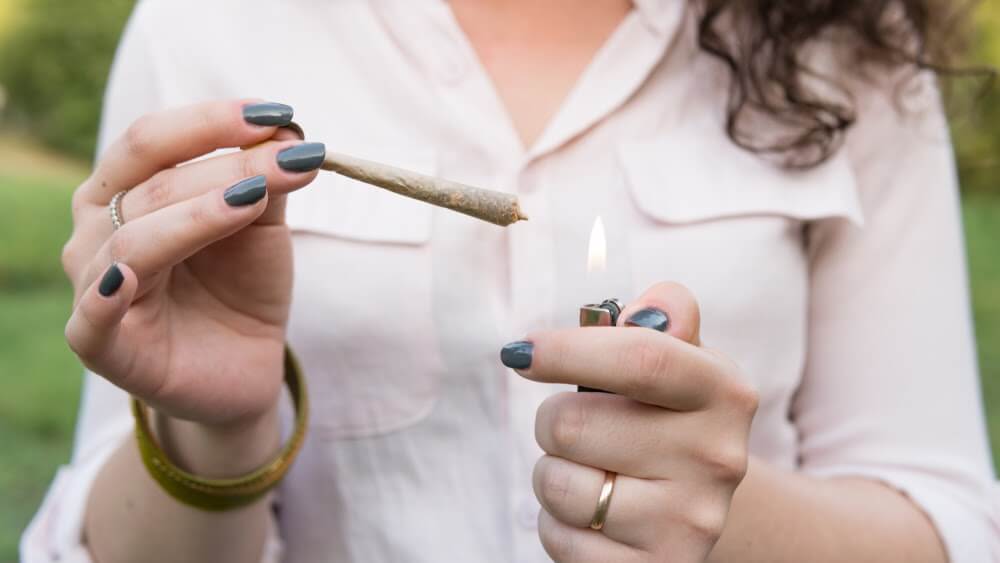 What’s the difference between blunt vs joint?

Today, there are more ways than ever to enjoy cannabis — so we found it shocking that such a large number of smokers still prefer lighting up the old-fashioned way: with a joint or a blunt.

For our newbie readers still learning about the industry and the different methods of consumption, you’ve probably wondered what the differences between a joint and blunt are, and which method is the most effective.

The most notable difference between blunts vs joints is the colour and size.

Blunts vs joints are much larger and darker because the paper used is bigger, and it contains tobacco. The only blunt paper you can buy without tobacco is hemp wraps, so be mindful of this if you’re wanting to enjoy a blunt sans tobacco.

Joints, on the other hand, are much smaller, slimmer, and are usually white — but can come in any color, design, or flavor. Joint paper is almost as thin as tissue paper, but natural, unbleached joint rolling papers can be a bit thicker; resembling the same tan color as a blunt.

Joints also can come with a “crutch” in them to help with stability and prevent your fingers from getting burned, whereas blunts will never display this feature.

The easiest way to tell the difference is to remember a joint looks more like a cigarette, and a blunt resembles a cigar.

What is a Blunt?

Blunts are cigars with the tobacco removed and replaced with marijuana.

They can also be rolled with a tobacco-free hemp wrap or tobacco leaves — but this completely depends on your preferences.

Blunts originated in New York because this was a popular method to discreetly smoke pot in public; naming it after the favored Phillies Blunt cigar brand founded in 1910.

There are some key things to remember before rolling and burning down your first blunt.

First, blunts contain a lot more weed than joints. Smoking one blunt is the equivalent of smoking 6 joints, so keep this in mind before taking a whole blunt to the head.

Secondly, cigar paper is toxic, at least more so than your regular, run-of-the-mill rolling papers — even with the tobacco removed. It contains high concentrations of nitrosamines and other cancer-causing toxins, and since the blunt paper is more porous than joint paper, it also produces more smoke and carcinogens.

With that being said, many smokers do enjoy the headrush, flavours and the experience of a blunt more so than a regular joint.

For many smokers (including myself) it’s a once-in-a-while experience that’s used to celebrate a significant event or milestone.

Rolling a blunt is a different process altogether compared to rolling a joint. Here’s how you can learn how to roll a blunt yourself!

What is a Spliff?

A spliff is a hybrid of a joint and a blunt. It’s a blend of tobacco and cannabis that is made using cigarette rolling paper.

Coined in West India, the name is a combination of the words “split” and “whiff” because it’s a split between weed and tobacco that produces a strong odour.

Like a blunt, spliffs contain tobacco — which isn’t good. While both marijuana and tobacco can cause damage to the lungs, tobacco has been linked to cancer while weed hasn’t. Furthermore, using tobacco with cannabis can increase the risk of becoming addicted or dependent.

What is a Joint?

The most straightforward one of the bunch.

Joints use tobacco-free cigarette rolling paper that is stuffed with weed. As we mentioned above, sometimes they are rolled with a crutch to help keep things from shifting and becoming loose and to prevent finger burns.

How to Roll and Smoke a Joint

Learning how to roll a joint is an easy process. While many smokers elicit the use of a rolling machine, finger rolling (preparing a joint using exclusively your fingers) is a time-honoured tradition almost as old as cannabis itself.

Over time and with practice, you’ll be a joint rolling master that’s even capable of rolling joints that use more than 1 rolling paper!

Firstly, you’ll need to break down your bud by hand or with a grinder before you begin rolling. This provides a consistent smoke and forms the structure of the joint. If you’re using a filter, you need to decide if you want it at the top or bottom, then place it down on your joint paper.

Next, you’ll want to load up your ground up weed on to your joint paper — lining it vertically down the middle. To shape the joint, hold it using your thumbs and forefingers, then roll it back and forth into shape.

Now for the hardest part: tucking your joint. Mastering the art of joint tucking is a skill that can be acquired with a little bit of practice, patience, and steady hands. Starting at the end where you have your filter placed, you’ll want to carefully tuck the paper around it.

Next, slowly shift your thumb to the other end of the joint — and tuck it in. After making sure your weed is tucked in all safe and sound, you need to start rolling it until you see its glue-end showing. Using your tongue, add moisture to the glue-end and pat it down to seal it shut.

Now you can light up! Make sure to light it slow and steady so you get a nice even burn, and make sure to inhale gently so it doesn’t burn up in smoke. If you’re a newbie to smoking, you’ll most definitely cough — which is 100% normal.

Just be sure to hydrate in between hits to prevent your throat and mouth from becoming too dry and pay attention to how you’re feeling mentally and physically.

If you’re smoking a J with your friends, keep in mind the same rules of smoking weed etiquette applies to smoking joints.

Limit your hits to two, reasonably sized puffs — then pass to the next person in the rotation.

On the exhale, pay attention to where you’re blowing your smoking, making sure not to blow it in anyone else’s face. Before passing your hit, ash it so your friend, furniture, floor, skin, or clothes don’t end up covered in it.

Concluding Thoughts on Blunt vs Joint

There you have it!

The differences between a blunt, joint, and spliff are relatively small, but those small differences can have a huge impact on your overall experience and well-being.

A blunt will pack a more powerful punch, but overall, joints are better for you.  That said, the hardest part about smoking a joint, blunt, or spliff is knowing how to roll them, and being able to do it well.

All things considered, we definitely favour the joint over a spliff or blunt for health reasons  — but depending on your unique needs and wants, a blunt or spliff may be more up your alley.

Whichever one you pick, just know that the process remains relatively uniform for the 3. If you can roll one type, you’ll have no problem learning how to roll the rest!