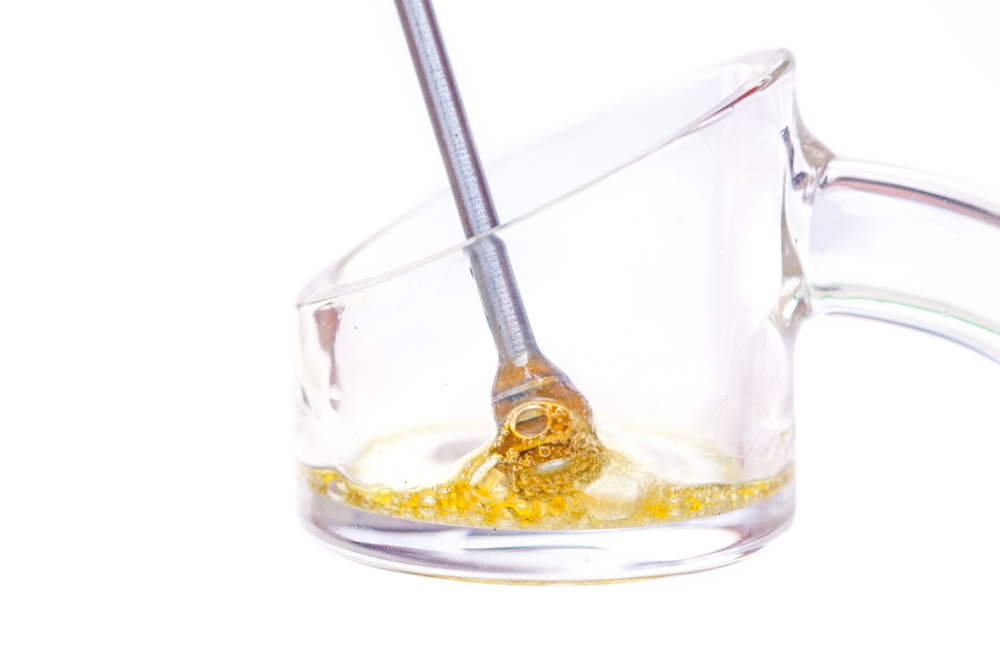 Have you seen the letters BHO written online and wondered what the heck people are talking about?

Booboo, we got you. Don’t you worry your pretty little head. We’re about to rain down some knowledge.

In the following article, we’re going to break it down and explain just what those letters stand for, which is butane hash oil, by the way. But we’ll get into that.

By the end, you’ll know all you need to know about BHO, how it’s made, and the different types of it out there on the market. Finally, we will explore the various types of BHO you can expect to encounter, as the name is a rather broad umbrella term.

Without further delay, let’s get into it!

BHO, commonly known as butane hash oil, is a solvent-based cannabis concentrate that comes in many forms.

Depending on the details of the butane extraction process used to make butane hash oil, the products come out in various consistencies and potencies. The final product that you and your friends enjoy is completely free of plant matter or plant material.

Instead, it’s potently packed with cannabinoids and terpenes and all that good stuff.

You can either use a solvent-based or solvent-less method when extracting cannabinoids and terpenes from your favourite bodacious buds. In terms of solvent-less methods, the two best examples of cannabis concentrates are kief and hash.

Now, when we talk about concentrates made using solvent-based extraction, there are lots of options. Today, we are going to talk about the use of butane as the solvent in BHO extraction. Other solvents include alcohol, propane, and CO², among others.

How is BHO Made?

Put simply, making BHO requires the use of butane, bud, and a butane extractor.

Without delving too much into the nitty-gritty technical details, when you make BHO, you push butane through a chamber filled with bud. The resulting product is then collected in a dish. From this point, there are several options for further processing and the removal of waxes and plant matter.

Several risks come with using butane, such as the need to be in an open-air environment. Also, proper BHO extraction requires the complete removal of all the leftover butane.

As long as the appropriate safety measures are followed, making BHO using butane can be a safe process.

Is BHO Safe to Consume?

Yes, all cannabis extracts are safe to consume as long as they are made using industry standards and proper safety protocols.

Both making BHO and consuming it can be dangerous if the process is done poorly, which is why you should always buy from a reputable source that makes their product in a regulated laboratory, if possible. When making butane hash oil yourself, ensure you follow all proper safety instructions to ensure that your final product is safe to consume.

Safety goes beyond purity, as potency is another factor to consider.

Does BHO Get You High?

While safe, BHO is ridiculously potent. Smoking it will get you real baked, real fast.

All consumers should live by the tradition of start low and go slow and stay within their tolerance level. If you are sharing this cannabis concentrate with friends, always start with smaller amounts, so everybody stays safe and sound.

You can always smoke more if needed, so start with less and wait at least 30 minutes before consuming more.

How to Smoke BHO?

BHO can be smoked via a method known as dabbing. Dabbing or taking a dab, is when a cannabis concentrate is applied to a hot surface. Using a dab tool, BHO is placed on a hot nail before being vaporized with a lighter or portable torch.

In addition, BHO can also be smoked through a vaporizer. Some people also place a drop or two on the end of a joint before smoking it.

While these methods are good, BHO enthusiasts agree that dabbing is the most effective way to get high.

Now that we’ve established the basics, it is time to get into the different extracts that can be produced with BHO. When it comes to butane hash oil, there is a tremendous amount of variety depending on the precise extraction processes used.

In this way, BHO is often a baseline starting extract that is then used to create a bunch of different kinds of concentrates through further processing.

One example of this is winterization. Basically, this process improves stability and removes excess waxes and fats also extracted by the butane. The method itself involves placing the extract under cold temperatures for specific amounts of time.

Several types of extracts rely on this technique to make the ideal product.

The way that your BHO is processed will ultimately impact the consistency of the product you buy. The key variables include heat, humidity, and whipping.

Generally, the term butane hash oil will encompass all of the following types of concentrates. What they all have in common is the use of butane as the solvent. This is similar to how the term CO2 oil is used as an umbrella term for all products made using CO² as the solvent.

Here are some of the best examples of BHO extracts that many of you have probably tried already (or want to!).

Don’t worry. It’s pretty straightforward. Most of the names directly describe what you should expect.

With a name like butane honey oil, it’s not surprising that the product is ooey-gooey. While the name may make you think it’ll be golden brown, the colour can vary from dark to light.

It is more about the consistency that gives this concentrate its name. Ultimately, it can also be used to describe butane hash oil.

Unfortunately, although its name may suggest otherwise, honey oil does not, in fact, taste like honey. However, it will certainly increase your smoke’s flavour and potency if you add it to a joint, bowl, or pipe.

The THC percentage of this concentrate can be around 70-85%.

As one of the all-time favourite options out there, shatter is also one of the most difficult to make correctly.

They get their name from their smooth, glass-like appearance that will “shatter” if dropped. However, there are variations of this product that are a bit more malleable, such as pull-and-snap shatter.

What is Shatter? Check Out The Complete Guide Here!

The colours vary dramatically, along with how translucent they are. The ideal shatter is smooth and hard and breaks into pieces nicely.

Shatter generally has a THC percentage of around 70-90%. Like other concentrates, this high potency comes at the cost of flavour. However, it doesn’t mean that shatter doesn’t have any taste at all.

It depends on the strain of bud used during the extraction process. If it has a higher terpene content, it may leave more flavour behind.

Wondering how to smoke shatter? Check out our comprehensive guide on what shatter is and how to smoke this smooth concentrate.

Nearly the complete opposite of shatter, crumble demonstrates just how much BHO can vary.

For example, instead of shatter, crumble is known to do exactly what its name suggests: it crumbles into pieces easily.

Its spongy texture is created by using a low temperature for a long period of time while purging the butane. The oil is known to crumble up during this process, leading to the name.

Crumble can be used on its own or mixed in with dry flower to enhance its effect. Vaping and dabbing are two of the most popular forms of consuming crumble as it enhances the flavour and adds an intense boost to your high.

Budder should act just like its namesake. It should be a soft and creamy texture like butter.

Many enjoy budder for its velvety-smooth consistency and the flavourful terpene profile that they offer.

Tokers often choose to dab budder as a way to enhance the terpene flavours and add potency to their smoking experience.

Somewhat similar to budder, wax is one of the all-time favourite butane hash oil options out there. It is more firm and chunky than budder but does not break apart like crumble, causing many to see it as the perfect compromise when it comes to concentrates.

However, it can melt in your hands, so don’t spend too much time enjoying the beauty of your wax before you smoke it.

One of the main reasons why wax is a go-to favourite for many tokers is that it has a high terpene content on top of being incredibly versatile, making it a more flavourful option.

The THC percentage of wax is often between 60-90%. Learn here how to smoke wax.

BHO distillate is often found in an oily liquid form.

With THC distillate, you can expect around a 95% concentration of THC or more, making it easily one of the most potent options you can get on the market.

It reaches this level of purity because the process of creating it comes in two parts. Like other concentrates, the first step is the extraction process. However, the second step is where the real difference lies.

During this secondary process, the impurities and solvents, such as butane, are removed, producing an odourless, flavourless, pure concentrate.

Distillate is most often enjoyed through easy-to-use vaporizers.

Phoenix Tears are one of the first examples of modern medical cannabis concentrates on the market.

Also commonly known as Rick Simpson Oil (RSO), Phoenix Tears are made using strong sedative indica strains. It typically has a thick consistency that requires a thinning agent like vegetable glycerin to make it consumable via vaping or dabbing.

The easiest way to describe the texture of Phoenix Tears is to say that it is thick and sticky, like sap. However, depending on the solvent used to create it, the consistency of the product can vary.

In terms of the flavour, reviews may vary from user to user. While it may not taste terrible, it doesn’t necessarily taste fantastic either. It possesses a definitive cannabis flavour with earthy and slightly spicy notes.

BHO – The Choice is Yours

BHO is a go-to choice for many cannabis lovers due to its versatility and various forms that it can come in. As we discussed in this article, no matter what your weed needs might be, there is likely to be a BHO concentrate for you.

Whichever type of BHO you end up enjoying, make sure you do so responsibly. Don’t forget how potent these incredible cannabis concentrates can be.

It’s best to adhere to the old saying: start low and go slow. Even the most experienced blazers may be surprised by just how potent BHO concentrates can be.

As always, it’s all about experimentation. It may take more than one try to figure out the amount that works best for you. But isn’t that part of the fun?