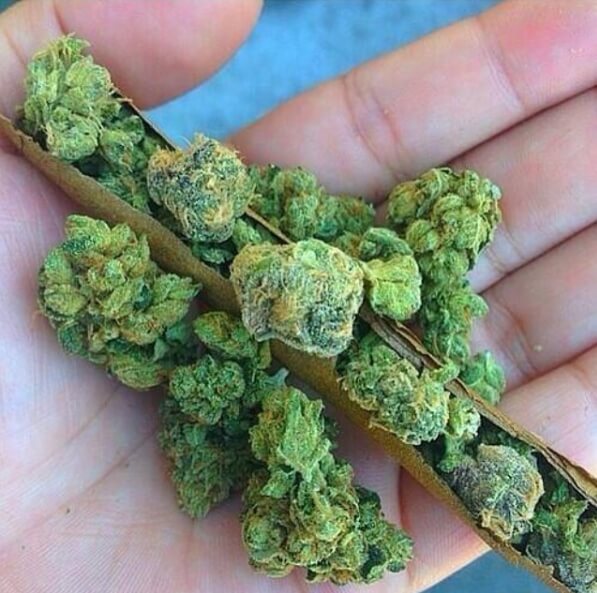 It’s a bong-load of a question that previously stumped the mind and stalled efforts to create new strains of Cannabis sativa with desired medical properties.

Scientists recently made way on this timeless query with this study that published in the November issue of Genome Research.

Through the use of a cannabis genome map, scientists determined how the species evolved into two separate strains with distinct chemical properties: hemp and marijuana. Pot became potent when its genome was colonized by a virus-like force called retroelements.

Study co-author Honoratus Van Bakel, Ph.D. explains to Inverse that the genomes of plants and mammals contain large numbers or retroelements, which are DNA segments with virus-like properties that allow them to copy themselves and re-integrate at other locations in the genome.

Retroelements aren’t exactly viruses — but they are related to viruses. They are sometimes called “selfish DNA” or “junk DNA”. These names are linked to the tendency of retro elements to make copies of themselves all over the genome. University of Toronto professor and co-author Timothy Hughes, Ph.D. tells Inverse that that process can lead to rearrangements of chromosomes, including duplications and deletions, because “the cellular machinery that maintains and repairs the genome can get confused when the same sequence is found in multiple places.”

This is what the team believes happened to the cannabis genes THACS, CBDAS, and the newly discovered CBCAS, which encode cannabinoids. THCA and CBDA specifically encode THC and CBD. The creation and examination of a genetic map detailing the drug-type strain “Purple Kush” and the hemp variety “Finola,” paired with a reference database of retroelements, revealed that these genes are in a very large region that mostly consists of retroelements that are similar to one another.

“We speculate that these sequences led to duplication of the THCAS and CBDAS encoding genes and, or, promoted subsequent rearrangements that make the surrounding DNA very different,” says Hughes.

Today, cannabis is traditionally classified as marijuana or hemp by the plant’s relative proportion of THC to CBD — a marijuana compound technically called cannabidiol that doesn’t get you high but is increasingly thought to have medical potential. Marijuana is abundant in THC, while hemp is not. Why there is THC goes back to those cannabinoid enzymes.

This likely created cannabinoids that aren’t naturally psychoactive but — once paired with heat — have a chemical structure that can change to produce psychoactive effects. And while retroelements played an important role in the evolution and diversification of cannabinoid enzymes, Van Bakel points out that this doesn’t mean that hemp is necessarily “closer” to the ancestral Cannabis sativa plant because it can’t get you high.

“It’s just that the different varieties were selected and bred for specific purposes,” Van Bakel explains. “Each variety [hemp and marijuana] diverged from the ancestor and the analysis of a much larger number of different varieties is needed to provide insights into which strain properties arose first.”

The team notes that by continuing to study how the cannabinoid pathway genes emerged, and which genes are associated with cannabinoid levels, scientists will eventually be able to breed strains designed for specific medical and recreational use. Because of drug prohibition, there’s been restricted scientific access to Cannabis sativa — and in turn, researchers are only beginning to understand how to take care of it as a crop and how to manipulate it to help people.

At the end of the day, the point of this research isn’t just to answer a question. According to Hughes, the goal is to provide answers “for the good of mankind.”