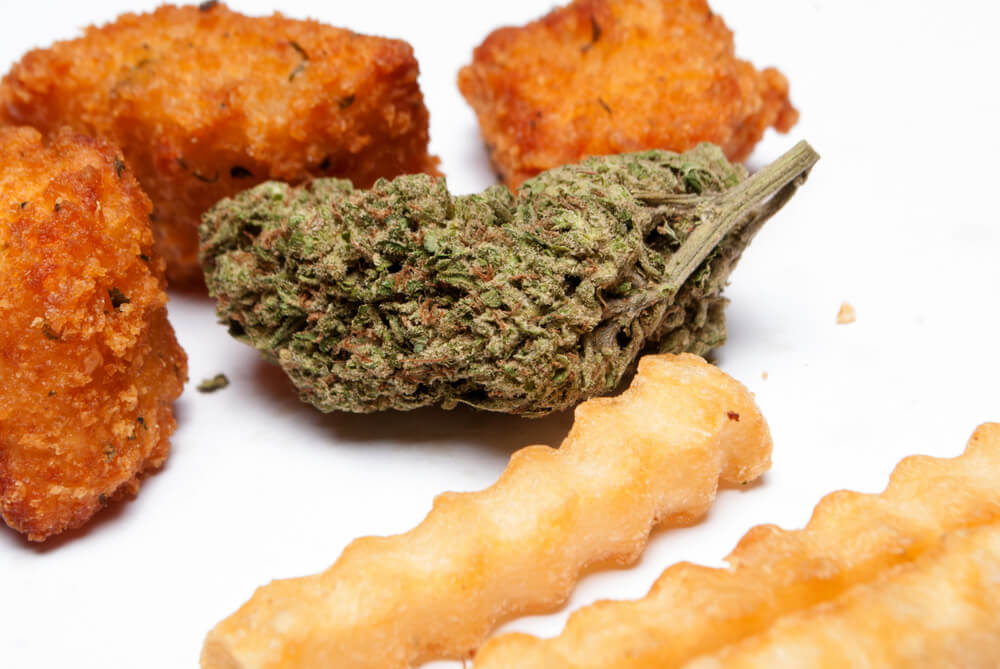 Are you familiar with the munchies?

We’ve all been there before. You’re sitting on the couch burning down a joint with your friends when it suddenly hits you – the munchies. It’s a feeling of seemingly insatiable hunger that gnaws at your stomach for hours on end until you finally eat something.

If you smoke, vape, or eat weed in some way or form, you will have experienced the munchies before. If you’re a frequent smoker, you’ve probably even prepared for the occasion too! What toker hasn’t prepared for the inevitable rise of the munchies by ordering a pizza or having a bag of chips on hand before they blaze up?

The munchies are synonymous with weed, but what is it about our favourite green plant that causes us to eat uncontrollably? And what can we do to stop it if we want to keep the pounds off when we’re medicating?

To answer all these questions and more, follow us as we break down the secret behind the weed munchies!

What Are the Munchies?

For those of us who’re uninitiated in the world of weed, the munchies will sound like an alien concept. Even after eating a large meal, the hunger pangs of cannabis call us to the pantry like a sirensong.

Like many activities that are enhanced by being high such as listening to music, exercising, hiking, and even sex, eating is an activity that is significantly enhanced while you’re under the influence.

So what are the munchies?

The munchies is a physical state that makes you unbelievably hungry and makes all food taste incredibly delicious.

The aromas, flavours, and textures of food, no matter how plain or bland it may be initially, become the most delicious thing in the world when you’re high. If you’ve smoked with a group before, you might have even come across a few stoner foods that are the definition of decadence.

Think mozzarella sticks with ice cream dip, deep-fried pizza, and other bizarre “stoner foods” that you wouldn’t even think about eating if you were sober.

What Causes the Munchies? Why Does it Happen?

While the scientific community is still uncovering the secrets of cannabis’ cannabinoids and how they interact within our own endocannabinoid system, scientists have made great strides in learning why weed makes us so hungry.

We already know that THC, the most prevalent and well-known cannabinoid in the cannabis plant, is responsible for weed’s psychoactive effect. The interaction of THC and other terpenes found within weed with our endocannabinoid system can energize us, increase our focus, and physically sedate us, among many other things.

Since the endocannabinoid system is responsible for many bodily functions, artificially introducing a large number of THC cannabinoids into our bodies can cause this system to function a little bit differently.

Scientists have discovered that when we smoke weed, a large amount of a hormone known as ghrelin is released into our bodies. Ghrelin is a hormone that lets us know when we should eat. Without ghrelin, we would never feel hungry and would most likely starve.

The release of ghrelin, coupled with the fact that being high increases all of our sensory perceptions (which explains why music sounds soo good when we’re high), creates a situation where we’re famished and makes the food we eat taste delicious.

But it doesn’t stop there!

If weed just makes you hungry, then we would stop eating after we’ve had our fill, right?

Well, it turns out that THC also limits the effects of our POMC neurons. POMC neurons are special neurons that let us know our stomachs are full and when to stop eating. When these neurons are blocked from doing their job, we literally don’t feel full until we feel sick!

The increased production of ghrelin paired with the blocking of our POMC neurons creates a vicious cycle where we become incredibly hungry, makes our food taste unbelievably good, and limits our ability to know when to stop eating.

While this might sound like an annoying side effect of consuming cannabis, the munchies has been a godsend for many suffering from appetite loss due to intensive medical treatments such as chemotherapy. The appetite-stimulating abilities of weed have helped many patients hold down food and supply them with the nourishment they need to get back on their feet!

That being said, controlling our caloric intake and keeping the pounds off is a concern for many of us. If you’re one of these smokers, here’s what you can do to keep the munchies under wraps!

Getting Through the Munchies

It doesn’t matter if you’ve had a snack or a hearty meal before you blaze up. If you’re high, you’re going to want to snack. Since your body doesn’t know when to stop, the best thing you can do is fill it up so you physically can’t eat anymore.

While this sounds a bit extreme, what would you rather have inside of your stomach? A few litres of water or a family-sized bag of chips?

When we’re high, our bodies literally cannot tell when we’re full or not. If you don’t drink water or fill it with something else, you’re most likely going to eat until you physically feel sick. Don’t be that person at the sesh – secure a steady supply of water and sip on that instead of downing that plate of nachos – no matter how tasty they might smell!

Don’t get us wrong; we love edibles. They’re tasty, easy-to-eat, and provide an accurate and precise dose every time.

However, they’re also incredibly potent and deliver a more powerful high due to a special cannabinoid known as 11-Hydroxy-THC. An edible high will hit you harder, last longer, and leave you fiending for food for a longer duration of time.

Instead of eating an edible to medicate, opt for a joint or a hit off of a vape pen instead. The high won’t last as long, and you’ll be able to control your urge to eat more easily and readily.

The simplest solution is often the best one. If you’re outside on a hike, biking, or soaking up the sun, you’re not going to have much opportunity to sit down and munch away. Sitting on a couch watching some cartoons? Your hand will naturally gravitate towards that bag of chips!

If you want to avoid the munchies, keeping your mind off of the fact that you’re hungry is a great way to get through it.

Good or Bad? You Decide

With cannabis hitting the mainstream, more and more professional chefs are beginning to experiment with cannabis. From medicated mac and cheese to weed fried chicken, the possibilities are practically endless. While most of us might not enjoy the extra calories we inadvertently consume, the munchies have been of great positive effect for many medicinal users.

So are the munchies good or bad? Ultimately, it’s up to you to decide. Personally speaking, nothing beats cooking up and devouring a hearty meal after a good sesh, but then again, we could also do without the post-dinner snacking!

Regardless of your opinion on the munchies, we hope this article has helped shed some light on what causes the munchies and what you can do yourself to control the urge when it arises!