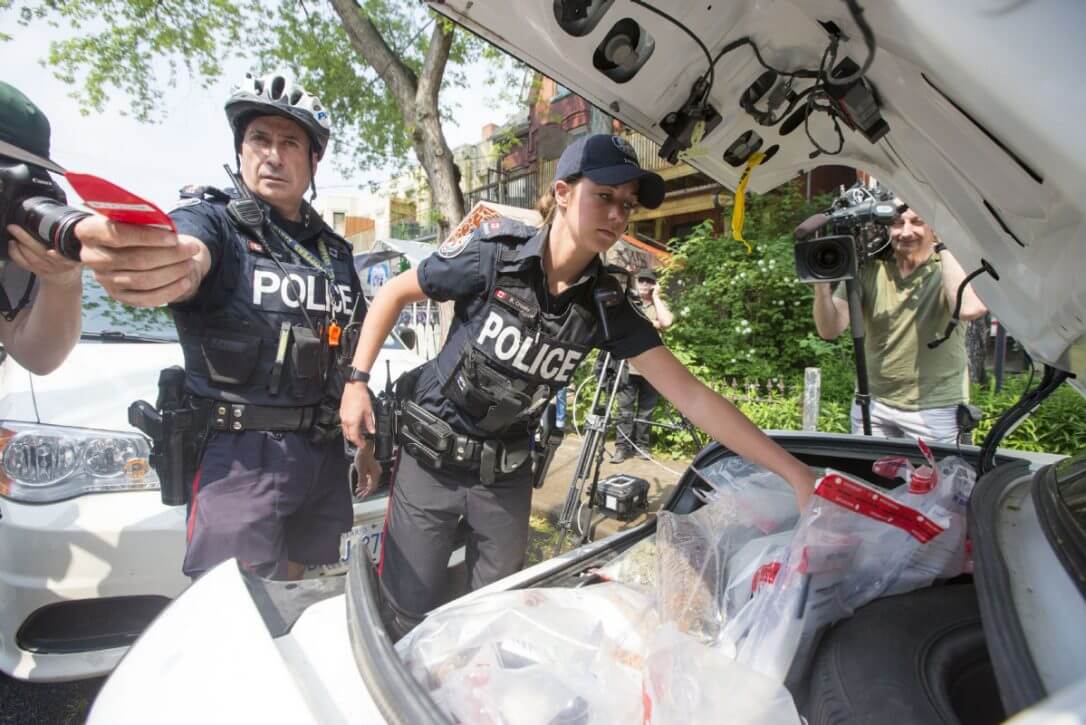 As governments lay groundwork for legal recreational pot next spring, Police raid a Toronto Dispensary and want the public to help them continue.

The pot sellers remain defiant, with one shuttered shop urging buyers to visit a sister store until it can reopen.

It was the second raid of S.W.E.D. dispensary at 1898 Danforth Ave., which was among 43 shops busted in late May when 90 owners, managers and clerks were hit with trafficking charges.

Another S.W.E.D. outlet, at 988 Pape Ave., was also hit in the chain of Toronto Police Raid on Monday along with Section 56 dispensary at 912 Danforth Ave. They were the latest in sporadic busts since the mass arrests in spring.

A sign on the S.W.E.D. window on Pape told customers it had no pot to sell because police seized it.

“We plan to reopen in the near future, but our 333 Danforth Ave. location is still open for business today. Please visit them for all your medical needs,” it stated. Staff at that location were indeed busy selling marijuana.

The dispensaries, some demanding a prescription and others not, started spreading across Toronto last year.

They flourished amid legal haze on Canada’s medical marijuana laws. A federal court judge in B.C. struck down a ban on registered pot-using patients growing their own plants. The judge ordered Ottawa to bring the law, allowing legal pot use for a variety of ailments, in line with the Charter of Rights and Freedoms.

Mayor John Tory, some councillors and residents began complaining when the dispensary proliferation showed no signs of slowing, with shops around busy intersections and sometimes near schools.

City staff say pot sales are legal only if Health Canada-approved patients get it, via mail or courier, from a federally approved distributor located in an area zoned industrial. The city worked with police on the May raids and charged the shops with city bylaw charges.

On recreational marijuana, Ontario’s Kathleen Wynne joined other premiers last month urging swift action from the federal government on pot rules. A federal panel is set to deliver a report this November that will be the blueprint for legalization legislation next spring.

“Using valuable police resources to enforce archaic marijuana laws that are set to be taken off the books a year from now is not just a clear misuse of public funds, but a poor allocation of police human resources,” he said in a statement.

“Enforcement measures only further stigmatize the thousands of medical marijuana patients across Toronto who rely on dispensaries for their needed medication.”

Steve Lorenz, 44, arrived at the S.W.E.D. on Pape and shook his head at the notice of a police raid.

“How many people got stabbed and shot in this city last night but they’re using undercover officers for this?” said Lorenz, who said he uses pot to help his post-traumatic stress disorder. “By the time next year rolls around it’s going to be legal and the cases will be thrown out of court.”

S.W.E.D. staff were diligent about checking for prescriptions and want Toronto to follow Vancouver’s lead and licence storefront dispensaries with conditions to soothe concerns, he said.

But a woman walking by, who declined to give her name, took a look at the note and pronounced: “Good, we don’t need that (shop) here.”

“We continue to raid marijuana dispensaries because the sale of marijuana outside of licensed government channels continues to be against the law,” said police spokeswoman Meaghan Gray.

The news release about Monday’s busts states: “Police are requesting anyone who has any information regarding illegal dispensaries or criminal activity to contact them.”

Authored By: The Star