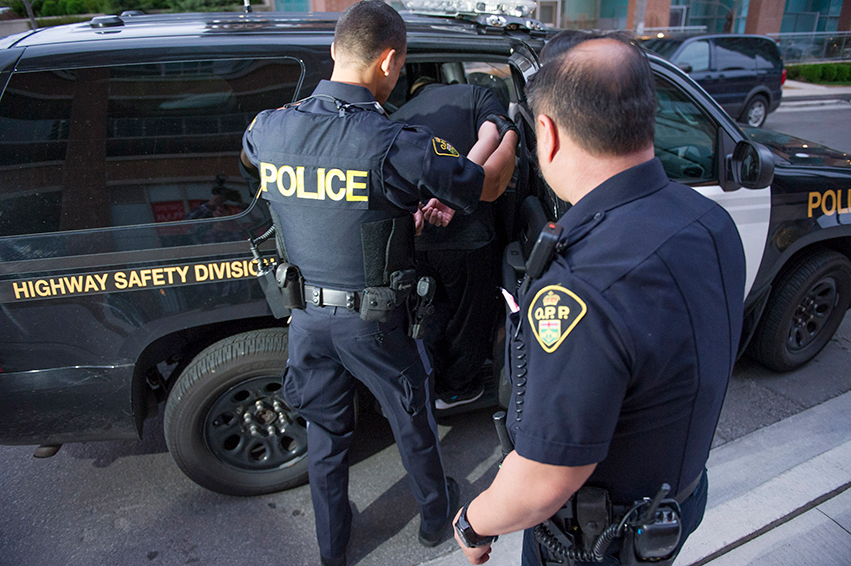 A Toronto police officer who stole and ate a marijuana-laced chocolate bar seized during a pot-shop raid was a “complete idiot” for tampering with evidence, a judge said Friday as the man pleaded guilty in the case.

Vittorio Dominelli, a 36-year-old constable who resigned from the force this week, pleaded guilty to attempting to obstruct justice in connection with the January incident.

Justice Mary Misener, who presided over the case, said Dominelli’s actions were on the low end of the spectrum when it came to evidence tampering, but were nonetheless significant.

“From the point of view of public interest, the impact is profound,” she said. “The conduct here you cannot describe as anything other than stupid.”

Misener added that the fact that Dominelli had taken a marijuana-infused item was not the issue.

“He might have taken cough syrup or a pair of woolly comfortable socks that he wanted to try on his feet,” she said. “It’s interfering with evidence.”

Dominelli, the son of a longtime Toronto officer and a father of three, was part of a team that raided an illegal marijuana dispensary around 5 p.m. on Jan. 27, according to an agreed statement of facts read out in court by Crown attorney Philip Perlmutter.

The officer, armed and dressed in plainclothes, agreed to go get pizza for the squad as they were going through the pot shop, court heard. While walking out of the store, Dominelli saw several cannabis-oil-infused chocolate bars, which he pocketed.

He and his partner, Const. Jamie Young, went to a nearby pizza place where Dominelli began to have second thoughts about taking the chocolate bars, Perlmutter said.

Dominelli told Young about his reservations and wanted to leave the bars at the pizza place but his partner disagreed with his idea, court heard.

After the raid was concluded around 11 p.m., Dominelli and Young were re-assigned to conduct surveillance on an after-hours bar, court heard. Dominelli then spoke about the then-looming legalization of recreational marijuana and the pair chatted about how neither had tried cannabis, court heard.

“He assumed it would be a minor mellow feeling,” Perlmutter said, reading from the agreed statement of facts. “He did not think consuming a small amount would impair each officer.”

The pair consumed all eight squares of one chocolate bar while on their surveillance mission and became “seriously intoxicated,” court heard.

Young has been charged with attempting to obstruct justice and breach of trust in connection with the incident, but the allegations against her have not been proven in court.

Dominelli said he initially didn’t feel anything but after about 20 minutes, the effects of the cannabis-infused chocolate hit him “like a ton of bricks,” court heard.

“He was sweating heavily and believed he was going to pass out,” Perlmutter told court.

Dominelli thought he was going to die, court heard. He asked his partner to radio for help, but she refused.

The officer eventually grabbed the radio from his partner, ran up the street and called for help.

“Send an ambulance,” a breathless Dominelli tells the dispatcher on the call, which was played in court.

When questioned by the dispatcher, Dominelli is heard saying he’s going to pass out.

“Are you injured? Did anything happen?” the dispatcher asks.

When other officers rushed to the scene one of them slipped on ice and suffered a severe head injury, court heard. That officer still has “significant difficulties with speech and vision,” and remains off work 10 months later.

Court also heard that seven people were charged in the pot-shop raids, but those charges were dropped due to Dominelli’s actions.

“I would say it was an act of utter stupidity, quite frankly,” Brauti said. “He has done everything he can to show remorse and make reparation for what he’s done.”

Dominelli offered to resign within weeks of the incident, the lawyer said. He is also depressed, shakes when he speaks and cries when talking about the incident, Brauti said.

The Crown is proposing a conditional sentence for Dominelli to be served in the community while the defence is arguing for a conditional discharge. A charge of breach of trust was withdrawn.

– Forwarded from The Globe and Mail