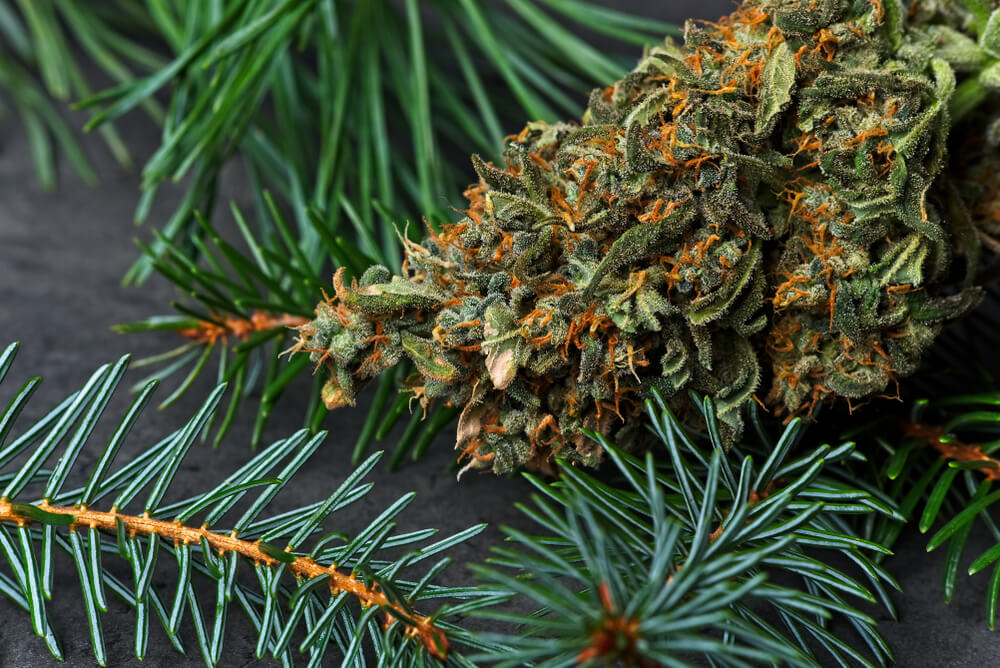 The world of terpenes is massive, with pinene being just one fraction of over 100 different compounds existing within the cannabis plant to discuss.

What sets pinene apart from the others is its delightful, familiar scent that will have you reminiscent of relaxing walks through the forest.  However, this tantalizing terpene is as unique as it is delightfully scented.

You may know what terpenes produce the fragrance of the weed we smoke, but did you know that there is so much more to this exciting world?

Today, we’ll discuss everything there is to know about pinene and why you should care about it.

Without further ado, let’s learn all about pinene.

Pinene is just one out of over 20,000 varieties of terpenes in nature. The cannabis plant itself produces more than 100 different terpenes, including pinene, limonene, phytol, nerolidol and others.

You’ve probably smelled it in numerous essential oils over your lifetime. Of all terpenes found in weed, pinene is by far one of the freshest scents.

Regarding the pinene found in cannabis, you can assume it is α pinene and not β pinene unless stated explicitly in the terpene profile. If you do find a strain with beta-pinene, be sure to give it a try.

We will discuss the effects of this terpene later, but it is important to note that exposure levels and the concentration of pinene inside a product, such as a CBD oil, will impact the results. Certain Sativa strains have high amounts of pinene due to the work of excellent breeders.

Where Does Pinene Come From?

In the plant kingdom, pinene is found all over the place. Examples include cedar, conifer trees, dill, orange, parsley, pine trees, rosemary, and eucalyptus. It is no surprise that pine trees, and more specifically pine needles, have large amounts of this terpene.

In fact, this bicyclic monoterpene is the most widely encountered terpenoid in nature.

It is also found in household products. The best example is turpentine, a household paint solvent, detergent, and more. The terpene is often extracted from plants to provide products with that familiar pine aroma.

After all, who doesn’t love that refreshing scent in their soap, shampoos, and other household items? The strong effect provides ample potential for this potent compound.

Pinene is also created by cannabis plants, with certain strains producing much more of it than others. Other cannabis strains will possess nearly none of it, so there is plenty of variety if you’d prefer something else, like a high-limonene strain, instead.

Jack Herer and Bubba Kush are two strains known for their reliable pinene content. You may also want to check out Chemdawg 91 or Trainwreck for a great Sativa option.

The strain genetics and growing environment conditions of cannabis strain all impact the ultimate amount of pinene found in the bud. We’ll get to the effects of this terpene in cannabis below, but first, let’s look at other uses of the terpene.

What is Pinene Used For?

In plants, one of the reasons why they create pinene is its ability to repel insects. However, that is just one of its many functions.

Other abilities of this multifaceted terpene include:

Pinene is considered to be a bronchodilator, which means it helps to open up the lung airways. This ability is one reason why people with lung conditions like asthma find this terpene beneficial.

In this way, indulging in a bit of bud with plenty of alpha-pinene before bed or exercise may just help you breathe clearly. The results of one study found that the terpene was also able to fight the infectious bronchitis virus by penetrating those cells.

However, like with anything else, it is critical to consult a medical professional’s advice if you suffer from conditions such as asthma to learn if it is safe for you to ingest high-pinene strains and cannabis in general. These strains should not be used as a self-medicating treatment tool.

The terpene pinene is also known to have anti-inflammatory effects. In this way, it may help those suffering from inflammation-related conditions, including fibromyalgia and arthritis.

The potential of this compound to help those suffering from inflammatory conditions is one that is worth further investigation as research is still in its infancy.

It is also worth considering whether medical cannabis patients ought to seek out this terpene if they have an inflammatory-based health concern.

Pinene is also used in topical antiseptics due to its cleansing properties. It makes sense that plants would produce this compound to slow the growth of microorganisms around them.

What effects this has in terms of human consumption is unclear, but this fact is one reason why specific household cleaning agents may employ alpha-pinene.

Some studies have also indicated that it may effectively combat bacteria such as Staphylococcus aureus, which can cause serious infections, including pneumonia, and Escherichia coli, which can cause stomach cramps, nausea and diarrhea. However, more research is needed.

In terms of the potential side effects of pinene, studies using the terpene in food have helped us learn about the safety and effects. We know that it is not harmful to your health, but it can increase your skin sensitivity.

Overall, it has a relatively safe chemical profile as long as exposure doesn’t get too extreme. If your cannabis-infused topical cream is causing you issues, see if you can find alpha-pinene inside.

Alpha-pinene is an incredible compound that has real activity when you use it. Currently, most of this potential requires further study. Much of the current evidence is based on the study of mice, which don’t always have the same effect or properties as humans.

While we wait for that research, why don’t we discuss the effect of combining THC, alpha-pinene, and CBD inside your bud?

Terpenes are thought to synergistically combine with cannabinoids to enhance the potential benefits of your weed.

This concept is called the entourage effect and it is one of much interest. While researchers debate the details, there is no question that pinene and other terpenes add to the experience of getting high.

Put simply, it supplies a fantastically pleasant aroma to enjoy while smoking and inhaling some righteous reefer.

This wonderful aroma can boost your mood and stimulate a positive start to your high.

The effects of pinene in cannabis have not been studied nearly as much as we would like to see.

High-pinene cannabis has a scent that brings you back to walks through pine forests on a sunny day. It has powerfully uplifting, mood-boosting potential time after time.

Some research indicates that the terpene may facilitate rapid metabolism when present in the bud.

There is some evidence to suggest that this terpene can counter some of the unwanted effects of THC. This includes reducing symptoms like short-term memory loss that occur with THC consumption. Based on the same logic, the administration of pinene included in your CBD oil may provide some additional health benefits.

Cannabis strains high in alpha-pinene are thought to encourage anti-inflammatory effects, especially when combined with CBD.

If you’re looking for a strain to use that helps encourage anti-inflammatory effects, ask your local budtender for help finding the information you need.

No matter which strain you decide, be sure to pay close attention to those piney notes when you smoke weed containing this incredible terpene.

Pinene – Not Just a Pleasant Smell

While perhaps the most identifying factor of pinene is its pleasant and appealing scent, there is much more to this terpene than you might think.

Although research is still in its infancy, pinene hosts multiple potential healing applications for its anti-inflammatory, anti-bacterial and respiratory healing properties.

However, while we wait, it presents an additional enhancing feature to the smoking experience that serves as a positive precursor to the wonderful, healing effects of weed before the body and psychoactive elements kick in.

As always, be sure to purchase your products from a safe and trusted dispensary to ensure that they are suitable to consume and that you are getting the highest quality possible.