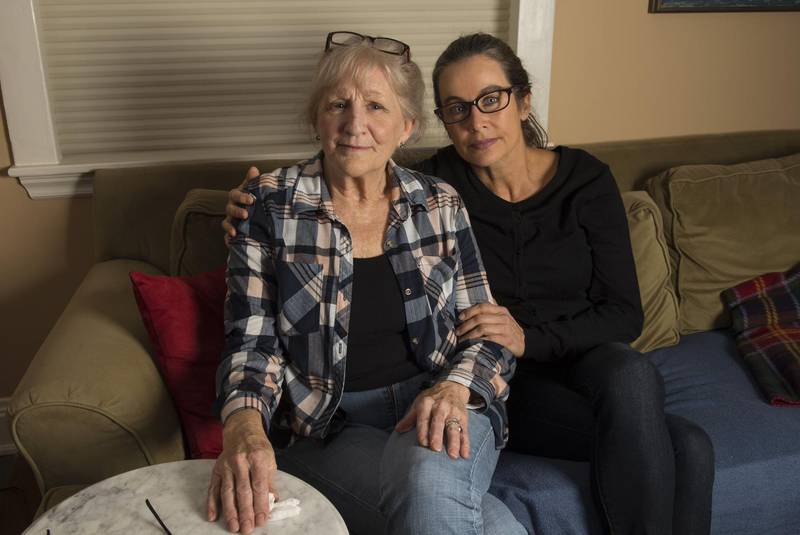 Her medical cannabis is one of the few things keeping Petite Henry from succumbing to the grief of losing her only two children to suicide.

But now she’s without it.

The Los Angeles resident had her medication confiscated at the Halifax Stanfield International Airport by Canadian Border Services agents this past Friday.

She says she was detained for two-and-a-half hours while her close friend Bobbie Cameron, who had come to the airport ready to welcome her to Halifax, waited.

Their families have been decimated by suicide. Cameron’s son, brother, father and nephew all took their own lives. After meeting one another on an online grief support group they have become the closest of friends.

The pair, both diagnosed with post-traumatic stress disorder, had resolved to unite in Halifax and launch a support group for women coping with the loss of loved ones to suicide.

“I was so distraught at that moment they took my medicine away that I wanted to turn around and go home,” said Henry, wiping tears from her eyes. “It’s that important to me and it’s what’s keeping me alive. It’s taken so much for me to get here and try to rebuild my life. People have no idea what losing a child to suicide is like, what that does to you.”

Though cannabis consumption is legal in Canada it remains illegal to bring it into the country, even for medical purposes. Henry said before her trip she consulted twice with United Airlines and was told she could bring her cannabis into Canada.

“A lot of people in Washington state thought Canadians would be coming down and buying marijuana and taking it back to Canada, just like they do with cheap booze and cheap milk and other kinds of products.”

She said she had no idea, when she arrived in Halifax, that her medical cannabis would be breaking the law. She said she had enough supply for 30 days. The Chronicle Herald obtained a copy of the receipt she received from the border agency showing a total of six-and-a-half grams of marijuana, cannabis oil and edibles had been confiscated.

The Herald also obtained copies of Henry’s medical marijuana patient identification card and documentation from her physician back in the United States, which shows she’s a licensed medical cannabis user.

“I told the border agents: ‘What is the difference between this prescription I have and the other medicines I’ve been prescribed? It’s what’s keeping me alive.’ ”

Henry said the officers suggested she look to purchase cannabis in the province but she’s unable to find what she needs.

“I’m white knuckling it and already I’ve had a couple of breakdowns,” she said.

Henry lost her son in 2003 and 11 years later her daughter also took her own life.

Canadian native Len Saunders is an immigration attorney based in Blaine, Washington state. He said the federal government needs to look at amending the Cannabis Act to allow cannabis to be transported, from states where it’s legal, to Canada. That includes the state where he practises.

“A lot of people in Washington state thought Canadians would be coming down and buying marijuana and taking it back to Canada, just like they do with cheap booze and cheap milk and other kinds of products,” said Saunders. “Then they found out the Canadian government said ‘you cannot import cannabis into Canada.’

“Everyone is shocked, including me, because if it’s legal in Canada. What’s the big deal? It’s no different than bringing booze in Canada. Why would you seize it?”

The Herald inquired with the federal government about whether it’s considering allowing Americans to bring cannabis into the country. The question was put to three departments including Public Safety Canada, Department of Health and Border Security and Organized Crime Reduction but there was no response to the question.

Henry says she intends to stay put in Halifax, and she and Cameron are determined to work with local women to launch a suicide support group.

Both want to see cannabis laws changed to allow medical cannabis users to bring their medicine into Canada.

“It’s wrong and unjust to deprive Petite of her medicine,” said Cameron. “I hope our federal government can see this.”

For Henry, she’s grateful to have a good friend who has been her only support for the past year and a half.

– Forwarded from The Chronicle Herald