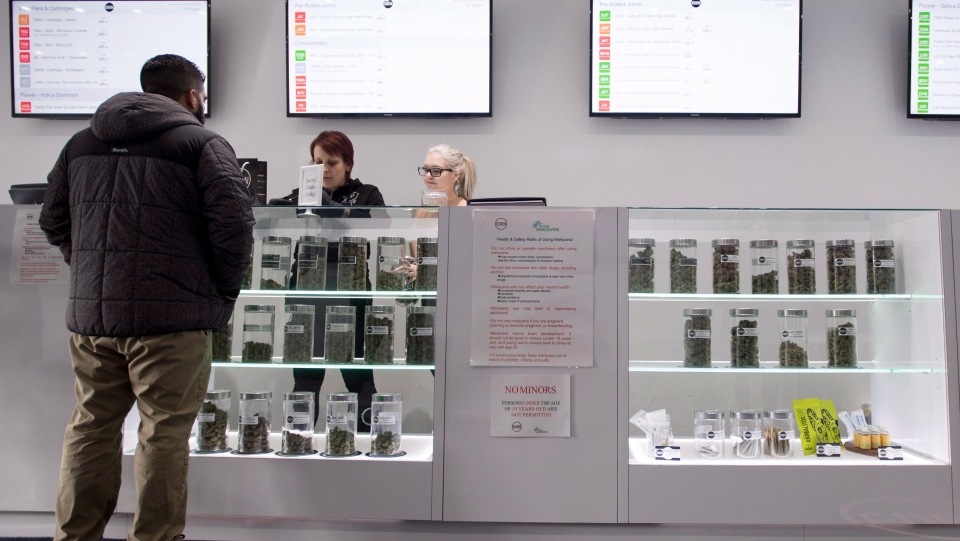 The three surveillance cameras and the steady flow of people in and out of the small, nondescript grey building are the only hint of the brisk business this downtown Toronto cannabis shops does behind closed doors.

Once inside, two men behind a white desk under a vintage chandelier ask patrons to provide government identification and fill out a membership form. Then, customers are allowed to enter another room through a steel door, where an array of pot products are on display in a glass case.

When asked what has changed since Canada legalized on Oct. 17, one staffer said: “We’re just busier.”

Among the many shoppers on Thursday, a fourth-year university student said he preferred to buy from this dispensary to avoid the delivery problems that bedevil the provincial cannabis store. Also, he didn’t want the transaction to appear in his banking records.

“It’s just too much of a hassle… it’s all about convenience for me,” he said.

It’s been nearly a month since recreational pot was legalized across Canada, and despite raids by local police departments and government warnings to illegal pot shop operators to shutter their doors or face consequences, the black market continues on.

Product shortages, delivery delays and other problems plaguing the roll-out have not helped, said Martin Landry, an analyst with GMP Securities.

“It hasn’t been perfect… And probably as a result the shift away from the black market has not happened as fast as most expected. But I think that’s short term.”

Canada legalized cannabis for recreational use on Oct. 17 with the elimination of the black market as one of the Liberal government’s main goals.

There was little expectation that it would disappear quickly, as the illicit market has survived in U.S. states like Colorado and Oregon years after legalizing recreational pot.

Statistics Canada estimates that during the fourth-quarter of this year there will be 5.4 million people wanting to purchase legal cannabis and 1.7 million continuing to buy illicit pot across Canada. Spending on pot during that period may range from $816 million to $1.1 billion while purchases of illegal cannabis may range from $254 million to $317 million, the agency estimates.

But getting users to switch from illegal sources hinges, in part, on whether the legal offering is a competitive one.

Meanwhile, in addition to limited amounts of legal pot products, cannabis-infused edibles are prohibited from sale until 2019.

In Ontario, where privately run brick-and-mortar cannabis stores won’t be ready until next April, and British Columbia, which has just one government-run pot store, illicit shops continue to draw in clientele.

His chain of stores in Vancouver are benefiting from the closures of other illicit dispensaries but also because B.C.’s lone legal store is located more than 350 kilometres away in Kamloops, B.C.

“How are you going to service five million people in British Columbia with one store that is nowhere near the population centre?” Briere said in an interview.

Briere shut down nine of his shops across the country but is servicing clients online and keeping his four Vancouver shops open while awaiting the outcome of ongoing litigation. Other dispensaries have also decided to keep their doors open while waiting for their license applications to be processed.

Still, the stiffer penalties under the Cannabis act As of Oct. 17, which include a first offence fine of up to $250,000 and imprisonment of as much as six months, coupled with the potential to be blacklisted from pursuing legal retail options have prompted several to shut down.

For example, the Green Room Society Dispensary on Spadina Avenue in Toronto has white paper covering up the glass windows and door. In the window, written on the paper in black marker it says: “Come say high on April 1st.”

The Ontario government warned in the days before legalization that black market operators must shut down or risk being barred from ever obtaining a legal retail license under the province’s private system.

Landlords in Ontario also face hefty fines for allowing illicit dispensaries to operate on their properties, putting further pressure on owners to close up shop, said Matt Maurer, a partner at Torkin Manes and vice-chair of the firm’s cannabis law group.

Others across the country have been forcibly compelled by law enforcement to shut their operations down.

In Port Alberni, B.C., the Royal Canadian Mounted Police raided two pot shops on legalization day for not having provincial licenses. A day later, police and inspectors from Newfoundland and Labrador Liquor Corp. raided a dispensary in St. John’s.

There were 92 illegal cannabis storefronts in Toronto on Oct. 16, prior to legalization, according to Bruce Hawkins, a spokesman for the city’s municipal licensing and standards department. That number has been whittled down to 21, as of Nov. 6, due to shutdowns of their own accord or by the city and police, he added.

Maurer has been approached in the year leading up to legalization and afterwards by dispensary owners seeking a license to operate a legitimate cannabis business, as the risk of being an illicit operator is heightened, he said.

Post-legalization, the provincial and territorial governments have a vested interest in shutting illegal pot shops down, he said.

“Every sale at an illegal dispensary is another dollar not going to the provincial government,” Maurer said. “So why would they tolerate that any further?”