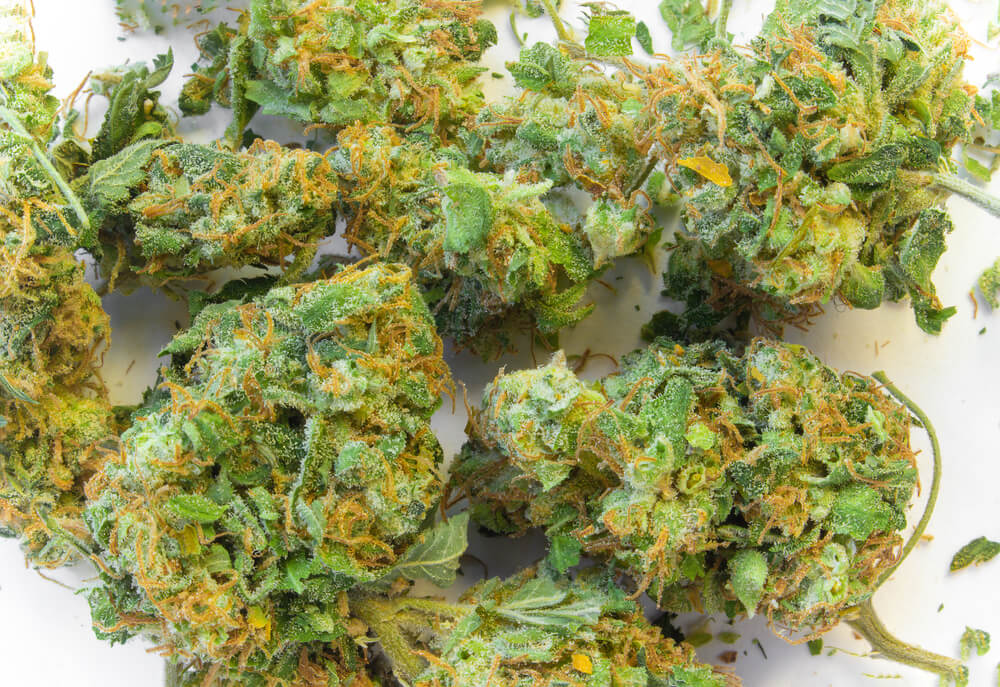 One of the most common euphemisms for marijuana is sticky icky, but is sticky weed a tell-tale sign of its quality?

In most situations, stickiness is not the most desirable quality. In fact, in some cases, it can be downright disgusting. However, in the context of cannabis, this quality is one of the most highly sought-after.

That said, if you aren’t familiar with sticky weed, no worries!

This article seeks to help settle the score by expanding on what makes weed sticky, the differences between sticky weed vs dry weed, and whether sticky weed is ultimately better.

So, without further ado, let’s get into the thick – or should we say stick – of it!

What is Sticky Weed? What Makes Weed Sticky?

For you newbies out there, trichomes are a feature on the surface of cannabis flowers that holds the plant’s cannabinoids and terpenes. They’re typically present on the flower, bract and leaves of the cannabis plant and have a sugary, crystal-like appearance.

On the other hand, cannabis resin is a substance naturally produced in the trichomes of cannabis plants.

It’s the resin that hosts many of the active compounds and gorgeous goodies that we all know and love about weed, including THC, the primary psychoactive component of weed that produces the standard ‘high’ effect.

In the context of sticky weed, we have resin to thank for its, well, stickiness.

That said, is sticky weed good or bad?

Like we said, in most other scenarios, something being sticky isn’t necessarily a good thing. However, when it comes to weed, sticky bud can be an excellent sign.

In some cases, it’s taken as a sign of premium or craft cannabis, but we’ll touch on that a little later on.

So, if sticky weed is taken as a good sign, how does it differ from standard dry weed? Is dry weed bad?

First and foremost, it’s vital to state that dry weed is not necessarily a bad thing. It certainly has its place in the cannabis community and the context of particular seshes. In fact, it’s arguably more the norm than any other variation of cannabis flower out there.

That said, some factors can distinguish between sticky weed and dry weed. Below, we’ll outline some of the key differences between these two variations of cannabis.

Both dry and sticky weed go through drying processes during the cultivation and curing processes – which we’ll outline in greater detail in the following section.

In these scenarios, producers will cut the buds from the stem of the cannabis plant and hang them in a cool, dry place to let them, well, you know, dry.

When it comes to dry weed and sticky weed, the dry weed will have been left to hang longer in some cases. Another common factor is that the starting plant matter had fewer trichomes and less resin to begin with.

So, in this way, it doesn’t mean that dry weed won’t get you ridiculously high. It’s just that the dry weed might produce a harsher smoking experience and might not have as robust of a flavour as the sticky weed.

In most instances, sticky weed is considered more premium than regular dry weed.

This distinction is because, frequently, sticky buds indicate that the cannabis plant’s trichomes are packed to the brim with resin, meaning that you’ll get more cannabinoids overall.

That said, dry weed still has plenty of cannabinoids, just not as many as its stickier cannabis cohort.

However, the quality factor doesn’t stop there. Sticky weed’s higher perceived quality seeps into other considerations as well, one of the most prevalent monetarily.

On top of possessing a higher overall concentration of cannabinoids, price is arguably the most substantial difference between dry and sticky weed.

In other words, sticky weed tends to come with a heftier price tag than its dryer yet still dank counterpart.

Ultimately, it depends on what you’re looking to get out of your experience. For example, if you’re planning on having a social sesh with friends, investing in sticky weed might not be the best mood for getting the most bang for your bud, even if the quality of the bud is higher.

If it’s a numbers game, you’re better off opting for a higher quantity of dry flower, even if the quality suffers a bit. Honestly, it’s unlikely that your fellow tokers will notice a substantial difference anyway.

It’s more about sparking up with your quality buds rather than the quality of the bud if you catch our drift.

Most of the time, if you pick up a cannabis bud and find that it’s sticky to the touch, it’s a sign that the grower was diligently dedicated to properly curing their weed crop.

When we say ‘properly,’ we mean carefully trimming the bud-covered branches so that they’re able to reallocate resources and energy into their trichome production.

The curing process comprises locking in all the critical cannabinoids and terpenes and other ganja goodness present in the weed while eliminating unnecessary elements, such as starches and sugars.

Often, this process involves reducing the moisture content of the cannabis flowers. However, cannabis cultivators gradually perform this activity over extended periods, which thereby increases their potency.

So as long as growers keep the buds between 15.5-21°C and roughly 45-55% humidity while drying. The non-psychoactive cannabinoids in the plant matter will continue to transform into molecules of THCA. Which, once decarboxylated, will convert into THC.

Keeping the buds below 21°C while it dries inhibits the terpenes from degrading. Which allows them to stay present in the buds until they reach your smoking vessel of choice.

That way, when it’s delivered to consumers like you. The weed will contain high levels of all those righteous components to produce the most desirable effects.

However, a sticky nug can serve as an indicator that the weed was packed up quickly while still wet. Meaning that it contains a high level of water, otherwise known as high moisture content.

When this happens, it’s actually a sign of a less potent nug that will lose water as it dries. Translating to less weed to smoke overall for users and a hay-like flavour once it’s fully dried, which isn’t awesome.

So, when it comes to determining ‘good weed.’ While many tokers and growers alike might argue that sticky weed is better, it’s not necessarily the case.

It is typically considered more premium due to the higher level of care that growers invest in. Bringing it to fruition and the higher overall concentration of the terpenes, cannabinoids and other compounds within the buds.

If you’re on the lookout for premium, high-quality cannabis, be sure to check out the Craft Cannabis Collection on the Herb Approach website.

Herb Approach AAAA weed is premium top craft cannabis. The Craft Cannabis Collection consists of an exotic and diverse assortment of staff-approved and suggested cannabis varieties to provide customers with a wide range of options for only the best smoking experiences!

With this in mind, below, we’ll highlight some of the top 3 performing strains within this collection.

Death Bubba is a potent indica-dominant hybrid that packs a real punch! However, with THC levels ranging from 22-27%, Death Bubba is surely not for the faint of heart!

With great strength comes great sedation. We can assure you that you’ve never felt relaxation quite like this! Death Bubba hits hard with strong, euphoric cerebral effects coupled with a powerful body high.

If its effects don’t sound like enough to sweeten the deal. This strain will surely draw you in with its distinctly dank weed aroma and pronounced lemony flavour with a pleasant hint of pine on the aftertaste.

Purple Kush has made quite a name for itself in the cannabis community. It’s been flying off the shelves since its debut back in 2018.

The first thing you’ll notice about this Oakland, California native strain is its gorgeous deep green and purple bud structure, indicative of its pure indica genetics.

This strain is a pure indica with a purely potent high! With THC levels reaching up to 25-27% Purple Kush is perfect for the end of the night. Easing you into a peaceful sleep while relieving pain. Purple Kush is also well-known for its mild psychoactive effects that provide a happy, euphoric sense of contentedness.

“Dream” doesn’t even begin to cover it! Blue Dream is a sativa-dominant strain that tokers love for its sweet, blueberry-like flavour and potent head and body highs.

Famous across North America, Blue Dream is also a mainstay strain in many dispensaries worldwide. While its origins remain a well-kept secret, this strain is a favourite amongst both recreational and medical marijuana communities.

Even though its flavours are its initial claim to fame, Blue Dream is no one-trick pony! It has remained popular for so long due to its engaging high that stimulates the mind while promoting focus. As time moves forward, you’ll feel motivated, creative and energetic.

All you need to do is sit back, relax, and let this strain work its magic on your body and your mind!

Sticky weed has long been a signifier of quality, and while it is an accurate representation of premium cannabis, there is a time and a place for it.

In other words, don’t discount your run-of-the-mill dry weed just yet! If you’re looking to indulge in a group setting, sticky weed might be a bit too pricey for the occasion.

The primary distinctions between dry and sticky weed are that sticky weed contains higher concentrations of terpenes, cannabinoids, and other chemical compounds through a more involved and dedicated curing process.

In this way, the stickiness of sticky weed comes from its generous number of trichomes. As well as the plentiful resin they contain. That said, dry weed still contains plenty of cannabinoids, so it’s truly up to you which you’d prefer.

With this in mind, if you are looking to treat yourself to some next-level sticky icky. Be sure to hop on over to the Craft Cannabis Collection on the Herb Approach website to sample our diverse selection of sticky bud.