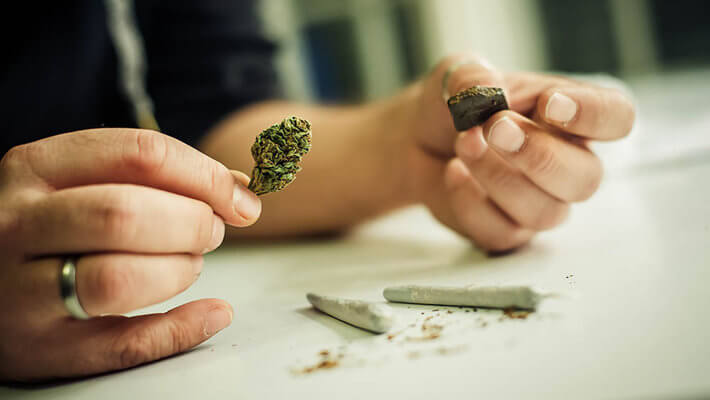 You’ve probably heard about hash or hashish, the most ancient cannabis concentrate originally used by Arabic cultures, but do you actually know how to smoke hash?

If you don’t, you wouldn’t be alone. There’s a lot of ways of smoking hash, whether it’s Bubble, Afghani or Morrocan, so if you’re ready to try something new, we’re here to unveil the special techniques of how you can better consume it.

Each method here is also provided with tips so you can perfect your technique.

8 Best Ways of How to Smoke Hash

1. Pack Hash in a Pipe or Bong

This method is the most common and by far the easiest. Before placing hash in your pipe or bong bowl, prime your hash first for a better smoking experience.

To do this, put your hash on a key or spoon and gently apply a flame until the hash is soft and crumbly in texture. Once it’s softer, crumble your hash with your fingers and sprinkle it in your pipe. It can either be smoked by itself or placed with flowers.

2. Roll Hash in a Spliff or Joint

There are a few different ways of how you can get this done, depending on how and what you like to smoke.

First, bust out the herb and get your rolling papers. Those of you who enjoy a “spliff” can add tobacco to the mix. At this point, you can either apply heat to the hash and spread it over the weed, and then roll.

When asking “how to smoke hash”, most don’t think about the other methods of consumption. It’s unfortunate because the healthiest alternative to consume cannabis is either through edibles and vaporizing.

However, using portable vaporizers to vape hash alone isn’t so straightforward, so we’ve detailed a step-by-step process in this article “How to Vape Hash in a Way That Saves Your Vaporizer.”  Overall, you’d need the right dry herb vaporizer set at a temperature between 180-210 °C, along with degummed hemp fibre.

For tabletop vaporizers like the volcano, it’s recommended you use a separate bag designated just for the hash, as hash residue builds up a lot faster. When there is residue buildup, the flavour of your vaporizer will be affected.

As for heating levels, many starts at level 1 or 2, while others start at 5 and work their way up with each successive bag. It really depends on the texture of the hash you have.

An easier option if you’re using tabletop vaporizers, is to mix it entirely with dry flower, keeping the proportion overwhelmingly on the dry flower side.

4. Go Old School By Using a Hookah to Smoke Hash

Hookah pipes come with one or many hoses attached so they’re ideal for groups. The hash is placed on the top of the middle section, and then you can smoke it through the tips of the hoses.

For smoking hash with a hookah, first, roll the hash into balls and place them at the top of the hookah. Then fill three-quarters of the hookah with water. Heat the charcoal and once red hot, place it on the hash. Watch this video for a great visual explanation.

This method is OLD school and dangerous. But it’s better you hear about it from us so that you don’t do it! Knowledge is power. Simply, we don’t recommend hot knifing hash, but if you must, here’s how to do it in the safest way.

This method involves using two pre-heated butter knives. You also need a straw to place above the knives so you can catch the smoke and inhale. Next, find a source of heat like a coil stovetop.

Start by heating the knives. Once hot, place a piece of the hash in between the two knives, pressing them together to combust the hash instantly.  When the smoke starts to form, catch the smoke with the straw and inhale. Don’t place the straw too close to the knife because it might burn the straw.

6. The Classic Glass and Pin

The Glass and Pin is another vintage method that involves capturing the smoke in a glass, and then using a pin and straw to follow. Weird, right?

For this method, we are going to capture the smoke in ordinary glass. First, you need to place a small piece of hash on the pin. Then, light the hash until you see a little flame.

When you spot the flame, blow it out. Immediately put the glass over the hash and let the cup filled up with smoke. Lift the glass a little and use your straw to inhale.

Dabbing is when you smoke a concentrate with a dab rig. In this case, we’re dabbing hash using a dab rig that looks something like a glass bong.

The rig has a dab nail that you heat up with a handheld torch, so there’s a bit of equipment involved.  For a detailed overview, here’s a guide to what is dabbing and how to dab.

As for a short and sweet description to dab hash, start by turning on your torch and point the flame at the nail so that it becomes red hot.

When the nail is red hot, turn off your torch and put the glass dome over the nail. Next, get your dabber and apply your hash/dab directly on the nail inside the dome and inhale it in.

A bottle hit is where you use a cigarette, add hash and cut a hole in the bottom of an empty plastic bottle to smoke it. Essentially you’re making a bong from a bottle!

For taking bottle tokes with hash, grab a plastic bottle and a cigarette. Cut a hole in the bottom of your bottle just large enough to stick a cigarette through.

Once the hole is cut, ensure the lid on the bottle is attached. Put a bit of hash resin on the end of the joint and light it. Stick it through the hole and wait for the bottle to fill up with smoke.

Then, put your hand over the hole in the bottom, remove the bottle cap, and inhale the thick smoke!

Explore the Ways of How to Smoke Hash

Now with the best ways of smoking hash at your fingertips, how do you decide which option is for you? Are you going to go for the traditional hash by sprinkling a little in your pipe, or will you go more modern with vaporizing? What about experimenting with a dab rig?

Whatever you decide, have fun, be safe (just stay away from the hot knives) and make sure you’re using the finest hash.

Tired of not getting the quality of hash you deserve? Herb Approach carries an assortment of high-quality hash, from Bubble Hash to Morrocan to Afghani. Check out our selection here!

How to Vape Hash in a Way That Saves Your Vaporizer

How to Make Bubble Hash: Clean, Easy and of the Finest Grade

What is Hash? A Guide for How to Use and Make Hashish