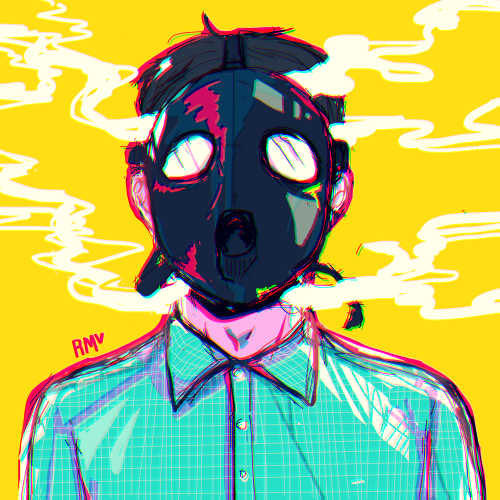 Curious about the gas mask bong? Here’s what you need to know about this not so pleasant experience.

We all know those times that have been really, really hyped up to be the best thing ever in existence, to only realize it was a big meh on the awesome scale. Finding a new way to smoke is always a fun game, especially when you and your friends have an abundant amount of flower and are looking for a bit of adventure.

This is exactly where the journey in life took me, to a destination that included broken dreams and a gas mask bong.

I will admit that sometimes I’m a bit of a sucker for hype. Especially when a favourite movie or tv show of mine displays an act that, well my life would seem incomplete if I didn’t partake in. I would hope most, if not all of you have seen the classic (it’s a classic to me and you’ll never take that away!) Knocked Up. This romantic masterpiece follows the lives of two characters (Seth Rogen and Katherine Heigl) that get tangled up in each other’s webs after a 1-night stand.

While the movie itself is an influential piece of cinema that should be preserved in a time capsule (I really like the movie, sorry), the scene where Jonah Hill smokes from a gas mask bong always stuck with me. Not only am I a sucker for hype, but a good Star Wars reference is also always a cherry on top. Jonah really made it seem like if you’re going to be a real stoner, a gas mask bong is a must. Boy was I wrong.

Things Aren’t Always Greener on the Other Side

The time had finally come, I bucked up and bought myself a nice little gas mask bong. It was your standard black face mask, with a purple bong attached, but it meant so much more to me. What I had wish I had known is that you for one, need a teammate, and second, if you don’t close your eyes IT HURTS LIKE HELL.

Sparking it up proved to be a task in itself. The angle of the bong makes it practically impossible to see where the bowl is. After prodding around and making an educated guess of where the target is, I managed to half-light it up. It may not have been the biggest toke, but it was more than enough to send my eyes into a fiery hell that only satan could understand. For a solid 10 minutes, my eyes felt as if they had taken Visine drops that were replaced with cayenne pepper juice while I wasn’t looking.

After realizing that I should have closed my eyes better, or even used some swimming goggles, I noticed that I had smoked barely any of my bowl, had wrecked my eyes and spent 15 minutes doing so. In that time I could have easily packed a bunch of bowls, or at least rolled a joint and been extremely satisfied.

The moral of the story is, just because it looks cool in a movie, doesn’t mean you’re going to enjoy doing it in real life. That’s why a gas mask bong isn’t the first thing you should rush to try.