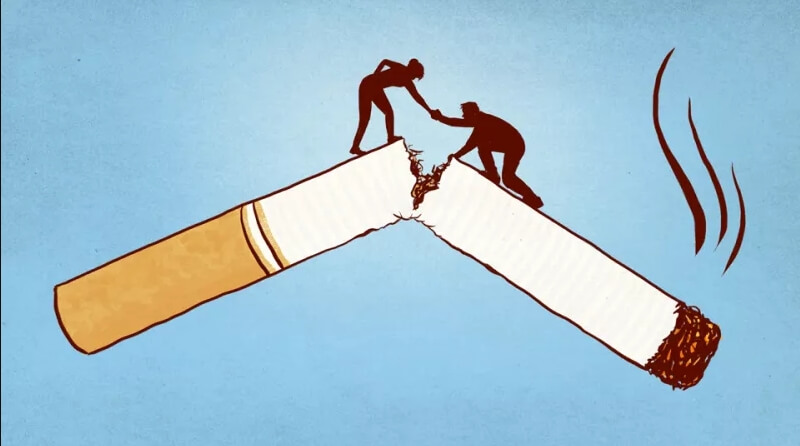 Are you done being a smoker?

Smoking cigarettes has been a socially acceptable habit for hundreds of years. Native Americans were long-time cultivators of tobacco for ceremonies and used it very responsibly, leading to a certain man by the name of Christopher Columbus bringing tobacco use back to Europe, albeit, with a severely more aggressive attitude towards its use.

500 years later an incredibly complex marketing system towards cigarettes has made addicts of millions of people. Smoking has become a daily habit, slowly killing those who have taken it up. If you’re ready to give up the life of a cigarette smoker, we got some great news for you. CBD has shown the ability to nick the addiction and lead you to a happy and healthier life.

Trading in Nicotine for Cannabidiol (CBD)

What makes cigarettes feel and good and become addicting? Not only is there a plethora of chemicals that your brain has become used to consuming, but Nicotine also releases Dopamine in your brain. Essentially making you feel happy and euphoric. Research has shown that Nicotine addiction has a direct correlation without the endocannabinoid system.

Smoking cigarettes accounted for 500,000 deaths last year in the U.S. That’s 1300 deaths a day from tobacco use!

When nicotine becomes abused, our brains ability to create dopamine for regular circumstances becomes hindered due to the fact it’s been reprogrammed to be triggered through smoking/nicotine.

This leads to an effect called “Re-consolidation”. Our brains have basically associated “good times” and being stress-free with the use of nicotine. Hence the desire to go for a smoke at certain times. Like when everyone is on a break, after a meal, during a coffee or with an alcoholic beverage.

These associations are what make dropping the smoking habit so tough. Our actions have led our brain to thinking a cigarette must be had to enjoy certain cues.

What makes CBD effective for thwarting the feeling and desire for a cigarette is its ability to disassociate good times with nicotine. This will help ease our cravings when certain cues or activities that would normally lead us to lighting up.

The University of London studied the effects between CBD and smoking cessation. 24 participants who were attempting to quit smoking were given an inhaler. Half were filled with a placebo and the other half with CBD. The findings were amazing, each user with a CBD inhaler had a drastic reduction in their tobacco consumption. Patients with the CBD inhaler smoked 40% less cigarettes compared to the test group that was using a placebo.

The research found that the reduction in stress and anxiety from CBD reduced cravings and the need to smoke. As well as having an oral fixation that removed memory cues from cigarettes was a great advantage.

Dropping the habit of being a daily or casual smoker is extremely difficult. Millions of people around the world are addicted to smoking, and up to recent were romanticized in movies and culture. If you are looking to engage in healthier activities and drop tobacco from your life, a CBD vaporizer may be your secret weapon. This should come without saying but a strong desire and active effort to quit is needed. Will power is what will get you through the deep valleys, but it’s all worth it!