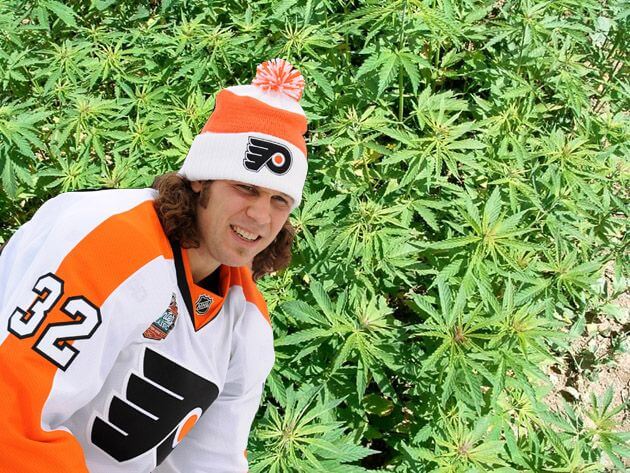 Professional hockey is one of the world’s most physically demanding sports. NHL players take a beating night in, night out for over 80 games a season. Riley Cote, a former left winger for the Philadelphia Flyers, knows that pain all too well. During his eight years as an enforcer for the Flyers, Cote would often wake up sore and swollen after a night on the ice.

The former NHL brawler—Cote racked up more than 50 fights with the Flyers from 2006 to 2010—is extremely dedicated to clean medicine and botanical health and healing. And that body care regimen has long included cannabis.

From an early age,Riley Cote found cannabis to be extremely helpful in managing pain naturally. In a recent interview with Leafly, he said he learned from his sister, who’s managed her multiple sclerosis with the help of a measured intake of natural foods and cannabis.

According to Cote, he was first around cannabis around the time he was 15 or so, when he was growing up in Canada.

“I got introduced to cannabis when I was growing up in Winnipeg, Manitoba, and you know, I guess I grew up in the middle of Canadian drug culture,” Cote said. “When I was first introduced to it, it was obviously completely on a recreational level, you party, you drink, and somebody was passing around a joint or whatever.”

“It wasn’t until I really got to about 20 years old or a little older when I started my pro hockey career—I really started to understand the therapeutic benefits,” Cote said. “That is when I started fighting—fighting in hockey, specifically, and really started catching the wear and so I think it started resonating to me that this is helping me manage pain, this is calming my nerves and anxieties of fighting—and help me sleep, and recover.”

“It was one of those things, it resonated well with me. It was a positive experience, it helped calm my nerves. There is a reason why you go back to something—some would argue it is addictive nature, but it is not. It is a subtle healing energy. We are trying to keep things in balance, and keep things intact, and I think cannabis does a good job at a spiritual level, and a mental clarity level to bring calmness to oneself.”

With Cote discovering the therapeutic benefits of cannabis in his early days as a pro hockey player, he would quietly consume during the season. There would always be a couple guys on his team who would also be cannabis consumers, so they would get together. Even though the NHL does not test for cannabis, Cote said it was “really taboo back then.”

“The idea of me talking about it, and talking about my experiences—positive ones—seemed threatening for my career and things that I loved,” he said. “So, I quietly did it regularly. That is how I managed it all, when I was at home where I resided, that is what I did.”

Once he got into the NHL full time, Cote minimized the amount of cannabis he consumed on the road. He didn’t want to risk a legal incident that might jeopardize his career. Rather than travel with cannabis on the team plane or bus, he would substitute Ambien, painkillers, and muscle relaxants.

All that did for Riley Cote was reinforce how important cannabis was in his recovery.

“[Taking pharmaceuticals] takes its toll, it is not the same,” he said. “Cannabis is a spirited plant medicine, and pharma is not. I think it is dispirited actually. I think it ruins the cycle of life and the way you are supposed to operate.”

Cannabis in the NHL

Cote estimates that half of all NHL players consume cannabis in their personal lives. “I would say around the 50 percent mark at a minimum,” he told Leafly.

They don’t call attention to it, though. Pro hockey players also tend to keep a lower profile than other pro athletes. Pro football players routinely get suspended for failing cannabis drug tests. You almost never hear of a hockey player getting into trouble for marijuana.

One of the reasons for that could be that the NHL has one of the least strict stances on cannabis consumption in the world of pro sports. There are three drug tests a year, Riley Cote said, and the league basically turns a blind eye to cannabis. Cannabis is not on the league’s list of banned substances.

“From what I understand, there are three different types. You get tested three times a year, all totally random, and within those tests, there are three tests: A, B, and C. A tests for performance enhancing drugs. B is for street drugs, and then C is a placebo. So you have a two and three chance of getting tested for something, and a one and three chance of not getting tested for anything at all. In each test though, you actually think you are getting tested for any of the three though. So performance enhancing drugs, if you test positive it’s a 30 game suspension, loss of pay, and it becomes public knowledge. Street drugs, which is obviously where cannabis is placed, you get a phone call from the substance abuse program and the NHL PA. Only the PA knows, it does not become public, and if you test positive for a harder street drug, like cocaine, ecstasy or something in that realm, they would put you into a substance abuse program for like 30 days. You don’t lose pay, it is just what the PA does for you.”

Cote said he’s never heard of a player getting put into the substance abuse program for consuming cannabis alone. If so, he said he would have failed the test every year.

Cote retired after the 2010 season. Since then, he’s worked as a cannabis advocate. Shortly after retiring he founded the Hemp Heals Foundation, which advocates for cannabis and hemp as a viable resource.

Recently Cote co-founded a 501c3 non-profit along with five other former pro athletes to create an alternative healing platform, and resource for athletes. According to Cote, this resource is not limited to pro athletes; it also offers information for college athletes as well.

Some of the members of Athletes For Care are “guys who are retired who have a ton of physical acute injuries,” Cote said. “We can help direct them to resources such as cannabis and hemp, but not exclusively to just those two—there’s mediation, yoga, other types of botanical healing and resources like that.”

Early returns from Athletes For Care are positive. The group recently sponsored a kickball game in Denver, and plan to organize other events in the near future.

“It is giving these guys purpose,” said Cote. “They’ve been athletes their whole lives and have been glorified as strictly athletes. Obviously there is more to life than just being an athlete and playing a sport. There is a much bigger picture here. A lot of these guys lacked an identity, lacked purpose in life, and are looking for something to grab onto. I think the alternative healing platform, and specifically cannabis and hemp, does such a good job connecting and helping people find purpose.”