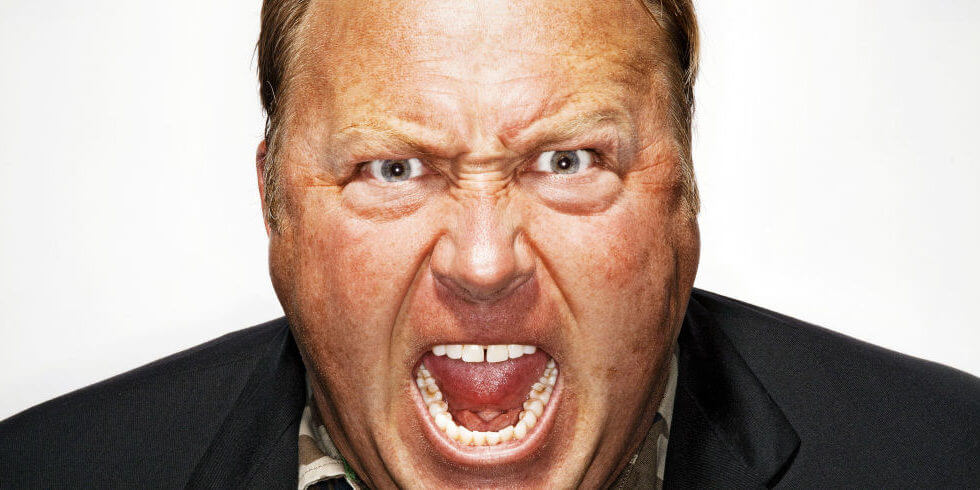 Alex Jones is the man behind InfoWars and such insane ramblings as “Barack Obama is a literal demon!” and “9/11 was an inside job!” and “The Newtown massacre was a hoax and none of those children actually died!” In other words, he’s a dangerous maniac with a microphone. And more than that, he’s a dangerous maniac with a microphone to whom Donald Trump has lended some semblance of credibility. So while I’d usually give someone a pass from scrutiny during a tough time, Alex Jones gets as much of a break as he’s given any sane person whom he “monitors”, which is to say none at all.

Yesterday Jones testified in court, and it was very weird. First, the questioning opened on an unusual note. His ex-wife’s lawyer began the proceedings by asking if Jones had eaten chili. I know, it seems crazy. And it is, but not in the way you might think. This explanation comes from BuzzFeed News’s report:

The question was in reference to Jones’ March 4 deposition, in which the 43-year-old radio and TV personality was unable to recall the names of his children’s teachers after eating a big bowl of chili.

You know how sometimes you can’t remember things because you had some chili? I hate it when that happens to me. It’s like, “Dammit, Jack! How can you expect yourself to remember to pick up your girlfriend from the airport if you’re gonna down a bowl of chili?” Oh, that’s not a thing? My bad. It was used as an excuse in a deposition, so I thought it must be a thing. Anyway, Jones then got pissed about the notion that he’s a “performance artist” and expressed frustration with the meda for reporting that. I get it. I hate when people say things about me that aren’t true. The only problem is, in this case, IT WAS HIS OWN LAWYER who made the argument. But yeah, blame the media.

Jones said he sometimes smokes marijuana — nearly yearly — “monitors its strength, which is how law enforcement does it.” He then added that he tested it because he believes it is now too strong — a development he blamed on billionaire and political donor George Soros, whom he claimed in court has “brain damaged a lot of people.”

I don’t even know where to begin here. First, the idea that Jones smokes weed once a year to “monitor its strength” is lunacy. Why does he have to monitor its strength? Who assigned him this task? And “which is how law enforcement does it”? Does what? It’s official police procedure to smoke weed once a year to monitor its strength? That certainly sounds like the made-up ramblings of a message-board troll, but even if that were true, Alex, I hate to break it to you, but you’re not law enforcement. You’re a radio host. That’s it. Well, I guess a radio host with the ear of the president. Which I guess says more about the state of the country than anything else.