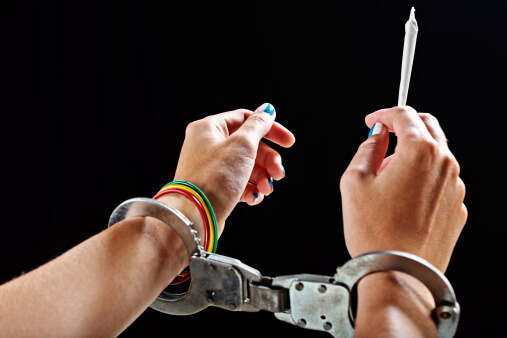 Most of us are lucky enough to live in a city where consuming cannabis isn’t much of an issue. But the sad truth is that places from all over the world aren’t as lenient. When you’re in these countries don’t take the risk of getting busted green-handed.

I hope you don’t, but if you get busted in Dubai with even a wee bit of cannabis you can get a minimum, mandatory sentence of four years. They might even consider traces of THC in your blood or urine as “possession.” Remember, if they find any amount – no matter how minute – it will be enough for a four-year prison sentence.

2. Indonesia: You have no chill

One joint can land you in jail for four years. Importing cannabis can get you imprisoned for anywhere between 5 and 15 years. In an extreme case, an Australian was busted importing 4.5 KG of the plant to Indonesia and sentenced to death. Thankfully, her sentence was reduced to 20 years. Still, bummer.

3. Malaysia: Where planting a seed gets you jailed for life

As bizarre as it sounds, it’s true. Planting a cannabis seed can land you in prison for life. Possession of more than 50 grams can get you at least 5 years in jail and a fine of more than 4 lakh Rupees (6,500 USD). The possession of a mere 200 grams carries a mandatory death by hanging penalty.

4. Philippines: A dozen years in jail, over a double doob

If you’re busted smoking up for the first time in the Philippines, they send you to a minimum of 6 months in rehab. But if they catch you puffing again, it could be up to 12 years in jail. That escalated pretty quickly.

If you’re Japanese, being caught with a doobie gets you five years in prison with hard labour. Thankfully, if you’re a foreigner, it’s unlikely that you’ll be jailed. Worst case scenario, you’ll be deported and never get to go back.

6. Thailand: You do NOT want to get busted with weed in Thailand

More than anywhere else in the world, this can get you into a sticky situation in Thailand. Because not only is it illegal, but the local law enforcement also has a bad reputation of using shady tricks to squeeze money from tourists’ pockets. There have been alleged extrajudicial killings linked to some of these cases.

7. China: Where executing drug offenders is an annual spectacle

This one’s difficult to put a number on, because the Chinese Government doesn’t make such records public. Amnesty International has estimated that 500 people are executed annually in connection to drug offences. This can include anything from cannabis to meth. Weirder still, the death penalties are carried out in an annual frenzy on UN’s International Day Against Drug Abuse and Illicit Trafficking.

The Kingdom of Saudi Arabia has a sort of three strikes rule. Strike 1: you go to jail for 6 months; Strike 2: jail for 7 years; Strike 3: death.

Looking for a country where cannabis is not an issue? Check out our guide on “Cannabis Tourism – Top Weed-Friendly Cities in the World.”